Today we have a guest smooch from cat-in-the-wild Melanie Milburne but first ........
The winner of last week's Sunday Smooch Giveaway is Franca!


And now for today's Sunday Smooch from The Tycoon's Marriage Deal.

Thanks again for having me back to bring you a Sunday Smooch, this time from my latest release The Tycoon's Marriage Deal. 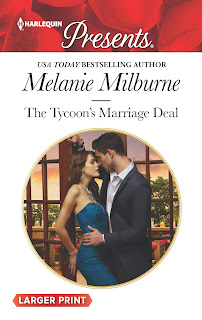 Every now and again I find a book will more or less write itself and this was certainly one of those. I love it when those books come along-they are the joyful books that motivate me to keep writing through the more difficult ones, as I live in hope that the next one will be like that.

Blake McClelland is a fast-living playboy but he needs to clean up his reputation in order to buy back his ancestral family home from the current elderly and ultra-conservative gentleman owner. So who better to help him whitewash his image than to pretend to be engaged to the cute little village bakery owner Tillie Toppington? The problem, you might ask? Recently jilted Tillie is Over Men. She won't have a bar of the charming and smooth-talking Blake, but she hasn't factored in her scorching attraction to him and his to her!

The set up for their first smooch...

Tillie has suddenly found herself pretending to be 'engaged' to Blake, because when she slipped on the gorgeous ring he'd tossed on her desk the previous day, it got stuck on her finger! She decides she won't let him have the upper hand, and when he comes into her shop and there is a customer there, Tillie goes into full on besotted fiancée mode!

Tillie was in the shop serving one of her regulars when Blake came in that afternoon. She had so far survived Mrs Jeffries's questions about how she had met Blake and how he'd proposed - with a good bit of embellishment, of course.
She handed over Mrs Jeffries her date and ginger scones over the counter. 'Ah, here he is now.' Tillie sent Blake a dazzling smile and gave him a little fingertip wave.'Hello, sweetie pie. I was just telling Mrs Jeffries how romantic your proposal was. How you got down on bended knee and begged for me to say yes. I told her you had a little cry when I did. Well, not just a little cry.' She looked at Mrs Jeffries again. 'He was bawling his eyes out. I was about to call for sand bags to stop him flooding the joint. I've never seen a man so in touch with his emotions.Wasn't that awfully sweet?'
Mrs Jeffries made oohing and aahing sounds. 'Everyone's so happy for you, Tillie.'
Blake was a terrifyingly good actor, for he simply smiled. Tillie knew he wouldn't let her get away with it for too long, but, in a way, that was part of the thrill of doing it. She wanted to spar with him. Their verbal exchanges excited her in a way no one else's conversation had before. She saw the I'll-get-you-for-that-later glint in his grey-blue eyes and a shiver coursed down her spine like a tickle of a strip of tinsel paper.
'Aren't you going to kiss me hello, babe?' he said, 'I'm sure Mrs Jeffries won't mind.'
'Of course not,' Mrs Jeffries said, smiling indulgently.
Tillie came from behind the counter.What harm was there in a chaste brush of the lips? Actors did it all the time and much more than that, too. She came to stand in front of him and planted her hands on his chest and looked into his wickedly glinting eyes.
Better get it over with.
She closed her eyes halfway and lifted her mouth to his descending one.
The first brush of his mouth against hers sent a frisson of heat right to her core. The second wasn't a brush-it was a lingering pressure that made her lips open on a gasp and allow his tongue to glide in with such toe-curling expertise every cell in her body jerked upright as if jolted awake from a long sleep. His tongue grazed hers, calling it into a sexy duel that made her knees feel as if someone had taken the bones out. She leaned into his embrace, another cascading shiver going down her spine when his strongly muscled arms gathered her closer.
His hands moved from the small of her back to cup her rear, bringing her flush against him. She could feel the growing ridge of his erection, thick and urgent, speaking to her feminine form with such primal power it was almost shocking.
How could she be responding to him like this? She didn't even like him and yet her body craved his like an addict did a forbidden drug.
Tillie wasn't sure who broke the kiss but she had a sneaking suspicion it might have been him. She lowered herself off her tippy toes and smiled. 'Well, nice to know you're pleased to see me.'
Blake's smile told her he wasn't finished with her yet. 'Always, babe. Always.'

I hope you enjoy Blake and Tillie's pathway to happy ever after as much as I loved writing it. I have a signed copy for a reader who leaves a comment. And to get the conversation started - Tillie owns a cake shop and Blake loves her chocolate eclairs.

What is the one cake or bakery item that you can't resist?

Please come back next Sunday, when the winner of today's giveaway will be announced and a new smooch will be posted!