For those of you who are my friends on Facebook, you’ll know that I’ve been traipsing around Tasmania for the last fortnight. For sheer rugged beauty, Tasmania is hard to beat. It’s one of those places that can quite literally take your breath away, but it’s also endearingly quirky, so I thought I’d share three of my favourite things about my recent holiday with you.

1. The Beach! Obviously. ;-) Down the road and around the corner from my accommodation was Bellerive Beach. Happy sighs. I spent many a happy hour ambling there. But what was even better was if you went the long way around (along the little headland), you were treated to the most spectacular views of the harbour and Mount Wellington, as well as the beach. This is a small sample of the pics I took:


2. The headstone. Now around the other corner and down the other road from my accommodation was this lovely old church with an array of weathered headstones. 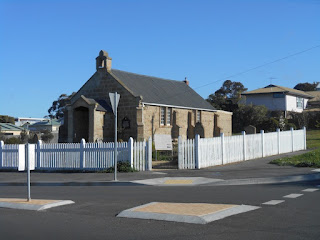 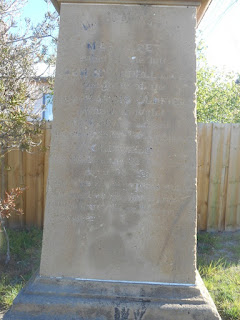 You can’t read it here (you could hardly read it there either!), but it says: Margaret died age 57 years. She was a most pious woman who has in death, as she did in life, found comfort in her redeemer. Beneath it is says: Joseph died 70 years. Long-term resident.

Long-term resident--that's the best they could say about him? Doesn’t that just make you chortle? Don't you wish you had an inside line on that story. Obviously Maggie was a bit of a favourite with the congregation, while Old Joe wasn’t so popular. ;-)

3. Tarraleah: We took a trip northwest from Hobart towards Lake St Clair in Tasmania’s Central Highlands. We were on a bit of a time schedule so we didn’t make it all the way, but we did stumble across the de-commissioned township of Tarraleah (which was once called Ticklebelly—what a great name!). It was a town built in the 1920s and 1930s as part of the hydro-electric scheme. Workers had to walk in with pack-horses as there was no road. But it became a booming township with a population of 2000 before automation made the workers’ jobs defunct. 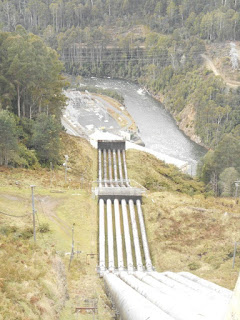 BUT, and this is the interesting bit, the town (the whole town!) was sold and restored, and it's now a tourist accommodation hub. There’s a grand art deco lodge, fifteen 3-4 bedroom art deco cottages (built for the engineers and architects), accommodation in the old schoolhouse, as well as cabin-style accommodation on the grounds. You can hire the entire place out! I was dreaming of the writing retreats we LoveCats could have. Happy sighs. The lodge comes with its own butler and chef. Happier sighs. Oh, dear reader, there’s a book in that. And I believe I’m the woman to write it. :-) What do you think?

Oh, and who is now dying to visit Australia's Apple Isle? Seriously, the air was constantly scented with apple blossoms (and jasmine, wattle and freesias), the breezes were crisp and clean, and the traffic slow. Nearly every person I passed on my walks said hello. I felt like I'd gone back in time.