Last Friday, I had the pleasure of catching up with fellow authors at the Association of Mills & Boon Authors (AMBA) in London.

I’m on holiday in the UK and I was fortunate enough to be here at the right time for the annual get together. The lunch is held in a lovely hotel in central London and is attended by authors from all over Britain and, this year, two Australians (one of them me!) and a New Zealander. The other Australian was C. C. Coburn who writes for Harlequin American and from New Zealand Alison Roberts.

It’s so enjoyable to meet with the authors who are all delightful company. (And it was a yummy lunch, too!)  In particular, it was great for me to catch up again with fellow Harlequin Romance authors, Christy McKellen, Scarlet Wilson and Jessica Gilmore as we all worked together on the four-book Maids Under the Mistletoe continuity, which launches in October. In fact it was fabulous to meet up with so many of the authors for the Romance line.

Editors and executives from Mills & Boon and Harlequin also attended and we were glad to hear that the future of category romance is looking healthy! 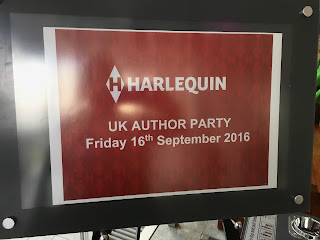 The lunch was followed by a party for authors at M & B headquarters on the seventeenth floor of the News Ltd building at London Bridge. The view of London, both old and new, is magnificent. Sadly, I was having so much fun chatting with fellow authors as well as editors and support staff I didn’t take any photos of the view. Or of the cover of my November release Greek Tycoon’s Mistletoe Proposal (Book Two in Maids Under the Mistletoe) when it flashed up big on the screen. Other authors took photos of themselves next to their covers—why didn’t I think of that!

Have you ever missed the chance to take a photo of something special? I’d love to hear about it! (I’ll be doing my best to reply to your comments but am at the mercy of intermittent internet...)