Last Saturday, on the spur of the moment, a girlfriend and I ambled into a local cinema and settled in to watch Bridget Jones’s Baby. Of course it starred Colin Firth as Mark Darcy and Colin Firth is one of my all-time favourite heart-throb-y actors. Happy sighs. And yet Mark Darcy—as much as I enjoy the character—is not one of my all-time favourite movie boyfriends.

On Sunday I stretched out on the sofa and watched the Lord of the Rings movie (again). Aragorn is my favourite hero EVER. And yet Viggo Mortensen, the actor who plays him, doesn’t do a whole lot for me in his other movie roles.

Obviously movie (and TV) boyfriends aren’t so much about the real life actors who play them, but how the fictional character that is being depicted in the movie comes across emotionally on the big screen—and no doubt that’s due in large part to the actor’s art in bringing that character to life.

Of course all of this pondering over popcorn had me reaching for the nearest piece of paper and jotting down a list of my five favourite movie boyfriends of all-time—because I love lists. And I wanted a list of heroes I could imagine sailing off with into the sunset to live happily ever after. This is what I came up with:

Captain Von Trapp in The Sound of Music
He was my very first movie boyfriend—I fell for him at the tender age of ten when I was allowed to stay up late and watch the movie. He hid a good heart beneath all of that bluster…and his honour and loyalty to his country in the face of Nazi Germany held me spellbound. I thought him soooo courageous. And the fact that he danced with Maria and sang with the children had me melting. :) I could definitely imagining sailing into the sunset (uh, maybe I ought to say setting off over the Alps) with him.

James Hammerton from Sliding Doors (played by John Hannah)
This character is such a combination of fun and sweetness. I fell head over heels for him—he’s kind, he makes the heroine laugh, he never pressures her…plus he’s a Monty Python fan! Seriously, what more could a girl ask for? Well, if she also happened to ask for someone who would challenge her to make her dreams come true, who would give her practical support to help make those dreams come true, and to make her believe that she doesn’t have to settle for second best, then James is your man. Happy, happy sighs.

Henry Tilney from Northanger Abbey (played by JJ Feild)
Jane Austen wrote great heroes. And while Northanger Abbey isn’t one of my favourite of her books, I love this particular movie version—it’s so good-natured and Henry is so utterly likable (which is why he’s a movie boyfriend rather than Hugh Grant’s Edward Ferrars from Sense and Sensibility or Jeremy Northam’s Mr Knightley from Emma). Henry has a sense of fun and a sense of the ridiculous that immediately attracted me to him. He also has to decide whether he can live up to his principles or whether he’ll allow his snob of a father to browbeat him. Of course, he defies his father, all for the love of Catherine, which makes me swoon every time. Yes, that is one man I could VERY easily live happily ever after with. 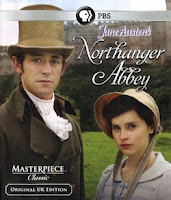 Mr Darcy from Pride and Prejudice (Colin Firth’s version please)
You know, I love every version of Mr Darcy that I’ve seen—Laurence Olivier’s, Matthew Macfadyen’s—but Colin Firth’s Mr Darcy gives me shivers (of the very best kind ;-) ). In the beginning he’s so arrogant and superior! And then he’s so vulnerable! And then he amends his behavior and tempers his pride and arrogance. And then he rescues Lydia. A man who changes (and sacrifices his pride) all for love. Oh, man, how could Lizzie not fall in love with him? I did. Completely. :)

Aragorn from Lord of the Rings (played by Viggo Mortensen)
Aragorn is a hero in every sense of the word. He has a destiny to fulfill…and while he is filled with doubts about his own strength, and has little hope that good can prevail over evil, he still gives the quest his all. He’s a man who will fight for good, who will do everything he can to protect those weaker than him, and oh my can that man wield a sword. He faces his every fear and triumphs. He’s not a man who seeks to become king, but it’s a title he certainly earns. Also, he’s hot—seriously hot. I play with scenarios about Aragorn and me. ;-) Honestly, I could write FanFic about this man.

Email ThisBlogThis!Share to TwitterShare to FacebookShare to Pinterest
Labels: michelle douglas, movies, Northanger Abbey, Pride and Prejudice, sliding doors, sweet romance, the lord of the rings, the sound of music