Twelve months ago today my mum passed away.  It had been a tough year for her—every doctor was amazed at her endurance.  Not us.  We knew our mum’s dogged strength and her desire to prove every you’ve-one-to-three-months diagnosis wrong.  So when this day came and she passed peacefully, we said a quiet thank you. 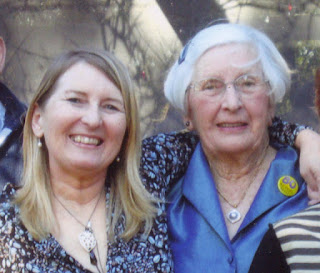 I miss her every day; that hasn’t gotten easier.   Not a week goes by without a dialogue between sisters (I’m blessed to have three) which contains a variation of “Mum would have loved that.” That could mean a movie, a stage show, a piece of juicy gossip, or an anecdote about one of her grands or great-grands.  The cheekier the behaviour, the better.

I’m not wanting to get maudlin—Mum would roll her eyes at such sentimentality—plus this post is about more than one anniversary.

This week my Dad, if he were still with us, would have turned 99.  He would have celebrated with several beers and a sly cigarette.  I had a beer for him but skipped the smoke.

Our middle son turned 29.  He celebrated with several Coke Zeros and much cake.  We also celebrated the retirement of a super-special gentleman who has been driving #2 son to his special-needs school and day program for 24 years*.  I was going to maths-up the miles involved—it's close to 100kms a day—but the task defeated me.  *He's one of a small team of Community Transport drivers but the only one who's been there since J's first day of school.

We celebrated Father’s Day quietly on the back of the hub’s latest adventure in chemotherapy. 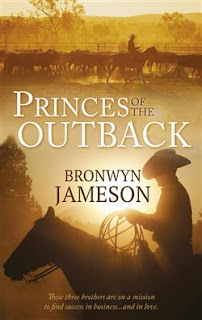 And on Wednesday/Thursday, we all recalled what we were doing when we heard about Princess Diana.  (Me, in Harvey Norman looking at TVs with #1 son on our way to a soccer game. We saw the news unfold, horrifically but somewhat appropriately given the media and public fascination with her life, on scores of television screens.)

This year also marks the 10-year anniversary of one of my highlights as an author.  In 2006 my three Princes of the Outback stories--The Rugged Loner, the Rich Stranger, the Ruthless Groom--were RITA finalists.  I was reminded of this by the lovely folk at Harlequin Australia who are re-releasing the trilogy this month with a gorgeous new cover.

Let’s talk anniversaries and celebrations.  Have you been celebrating or remembering anything special, happy or sad, this week, this month, this year?