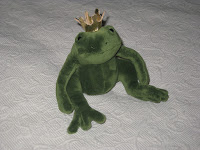 I have an assortment of items on my desk - little knick knacks and tokens from family and friends that make me smile when I look up from my writing. One of them is a little frog prince key ring given to me by my daughter. I was looking at it recently and suddenly realised that it was now part of a collection. An unintended collection.
You see, quite a few years ago I was writing a story about a hero who just refused to play nice. He was my heroine's worst nightmare, especially when she fell in love with him. Luckily for all concerned it turned out he had a heart of gold and a loving nature behind all that grumbling and posturing. As I wrote I thought of him as my frog prince - a hero who hid his true nature and would only turn into a real hero when confronted with the right woman.
While writing that book I visited a café and garden shop and look who was sitting, neglected in a corner? He's made out of cast iron and I had to bring him home. I set him in the garden where I could see him as I wrote and he was my talisman, my hope that I could finally, with a lot of work, turn this hero around. 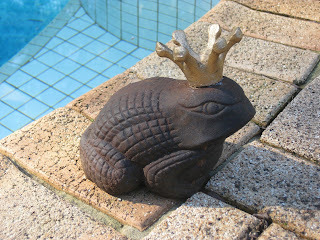 My kids were fascinated and next thing I knew my daughter presented me with a little frog prince key ring. He's the one who sits on my desk. Then, many years later, I was in the most wondrous stationery store I've ever seen, in Berlin, and found a beautiful metal letter opener. I'm afraid the photo doesn't do it justice. You guessed it, though, another frog prince. 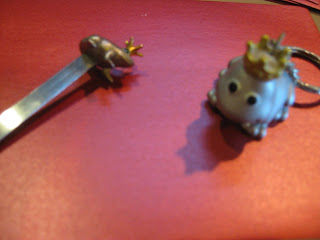 Earlier this year I was in Britain and my daughter again surprised me with a frog prince. This one is sleek but very cuddly and definitely has attitude. Other people bring home books and photos and snowglobes. My souvenir was a frog with attitude. Here he is on the way back to Australia. 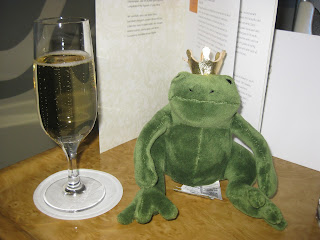 Somehow I seem to have acquired an unexpected collection of frog princes! I don't think of myself as a collector and I've never been particularly successful at starting and sticking to a collection of anything much. But these guys make me smile and I wouldn't be at all upset if I discovered another amphibian joining the collection one day.
How about you? Are you a collector? If not, what would you love to collect if you had the time and resources?
And if you're a book collector (sorry, but I can't resist), don't forget my latest story THE FLAW IN RAFFAELE'S REVENGE. It could be a contender for your next read.