Today I'm delighted to introduce another wonderful feature of Sunday Smooches showcasing the LoveCat finalists in this year's Romance Writers of Australia RuBY Awards. Today we are celebrating with Stefanie London and her fabulous book, Pretend it's Love! 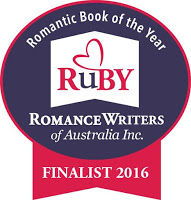 The Ruby is Australia's premier award for Romance authors. it's open to all Australian and New Zealand authors and the finalists are chosen by reader judges. We are so delighted and excited for Stefanie as this is her first and well deserved nomination for this award. Congratulations Stefanie!

But, before we share the smooch... the winner of last week's Sunday Smooch Giveaway is Jan VanEngen. Can you please contact Katrina on katrina (at) katrinacudmore (dot) com to receive your copy of  The Best Man's Guarded Heart .........


And now for today's Sunday Smooch from the fabulous Stefanie London ........


Bar manager Paul Chapman is sick of his family’s traditional ideals. Marriage, babies, and a white 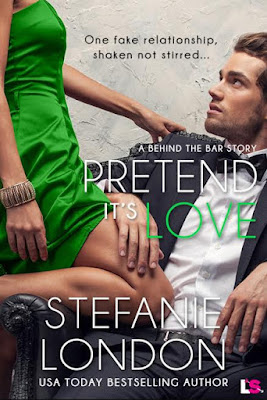 picket fence? Not his gig. But now that his ‘golden child’ big brother is tying the knot, Paul’s screwed. His ex will be there...and she’s having his cousin’s baby. Unless he wants to show up to the wedding alone and face his family’s scrutiny, he needs a girl on his arm. Now.


Cocktail specialist Libby Harris has spent her life earning the nickname Little Miss Perfect, all to win the love of her wealthy, controlling father. But she deviated from his plan, and now her business is on shaky ground. If it fails, she might as well kiss his respect—and her dream—good-bye. Her only hope? Convince the hottest bar in town to take on her product.


Luckily for her, the owner’s brother is sexy as sin and in need of a perfect girlfriend...


Scene set-up
Paul and Libby are at his parent’s house for dinner. They’ve agreed to engage in a fake relationship for mutual gain, and now they’re acting the part of his family. They’ve gone into the kitchen to put the dishes away and Paul works out that the family are watching the, very closely. So, being the cheeky guy that he is, he decides to take advantage of the situation.


Messy was an understatement. She didn’t want to get used and discarded for a newer model the way she had back in university. The way her father had done to her mother years before that.


History would repeat itself if she wasn’t careful, and Paul would only be able to use her if she let him. But she wouldn’t. Their arrangement gave her something precious—an opportunity, a chance—and she would otherwise keep him at a distance.


“But getting messy is so much fun.” He reached out to her and pulled her to him, his hips flat against her belly as he wedged her against the kitchen bench. “Besides, they’re spying on us.”


“My family.” He inclined his head back toward the kitchen door with a movement so subtle she felt as though they were spies communicating undercover. “We should sell it; we don’t want them thinking this is just business.”


His hands touched her hips, his fingers tracing the line at the top of her jeans just under her shirt. The throbbing started up again, insistent. Demanding.


“They don’t think that,” she protested, but her hands came up to his chest as if controlled by a puppet master tugging her strings.


His muscles were hard beneath her palms, and she had to stop herself from rubbing against him. Out of the corner of her eyes she saw a flash of red. Gracie.


“Okay, maybe they are watching us.”


“Ready to play the part?” One hand came up to cup the angle of her jaw. “Let’s see what kind of actress you are.”


“This is purely for show,” she said, the breath rushing out of her lungs as his face hovered close to hers.


“Of course.” His lips brushed the space next to the corner of her mouth, so close and yet the distance felt like pure, unadulterated torture. “You won’t enjoy this at all.”


He angled her head, coming down over her in a way that was completely possessive and in control. As his lips parted hers, she sighed against him, her body losing the ability to hold itself upright. Every nerve ending in her body sparkled like New Year’s fireworks, and her fists curled into his T-shirt.


The moment his tongue touched hers her mind went blank, the taste of wine on his lips and the scent of his skin driving her to a point of desperation. His fingers thrust into her hair, pulling her head back so he could take more, demand more. Taste more.


Unable to stop herself, Libby pressed her hips against him, gently rubbing up and down until a wonderfully guttural sound came from the back of his throat. He was hard beneath her hands, the muscles in his chest perfectly shaped. The press of his thighs against hers enough to spark wild images in her mind.


“You seem fairly invested,” he murmured against her lips, pulling away from the kiss with a dark fire in his eyes, “for someone who’s not enjoying herself.” Huge congratulations to the fabulous Stefanie on her Romance Writers of Australia's Ruby nomination!

Please leave a comment to go into the draw to win an eCopy of this wonderful read.

Also, come back next Sunday, when the winner of today's giveaway will be announced and another smooch will be posted!