Here at LoveCats, we love our four legged friends. So, today we're celebrating our furry friends, old and new. 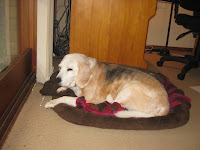 Here’s Daisy, our faithful beagle. When this photo was taken Daisy was a very old lady indeed. She would spend a lot of her time in her bed beside my desk, soaking up the sun that came through the full length windows and occasionally taking an interest in what happened outside. If it was interesting enough she’d get up and ask me to open the door. Often she’d change her mind a moment later and want to come back in – keeping me from sitting at my desk too long. I learned to write to the sound of wuffling as she lay beside me, dreaming. In her youth she was a stellar soccer player and escape artist. She’s remembered very fondly by all of us. 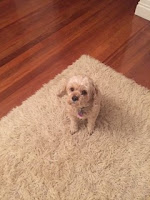 This is our Cavoodle, Toffee.  She is three years old, incredibly cute and matches our shag carpet! She afraid of pine cones but doesn’t mind sniffing our resident Echidna. 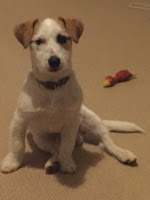 Fenton is the newest addition to our household.  My son and daughter-in-law brought him home last Christmas shortly before they left to live in London.  I still miss them but whenever I get too maudlin, he cheers me up.  He has a big personality and is full of life and mischief and smarts.
Yvonne Lindsay -

This is my little black cat, Dobbie. She'll be 13 this year and she's my little shadow and my occasional muse when the blanky on my desk meets with her approval.
Barbara De Leo - 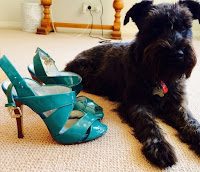 Cosmo the wonder dog. My kids decided on the name about two years before we actually agreed to getting a dog and unfortunately Cosmo ended up being a girl. She should have been a cat as she’s had nine lives including surviving eating five rubber lizards and a needle and thread. Yes, they both came out the other end - the rubber lizards, very slowly which looked pretty comical when one was half in, half out. The needle and thread not quite so comical.
We went on a three month holiday once and the house sitter realized she’s eaten a whole packet of ibuprofen. She spent four days in intensive care before my friend Heather picked her up to take her back to her house for a little R and R. Heather keeps bees and as soon as she was in the door from the hospital, Cosmo took a flying leap at the hive, was stung numerous times and had to be returned immediately to the vet for….some pain killers. We really DO love her.
Rachel Bailey -

Dougal the Border Collie is fifteen years old and on chemo for the cancer that will take him at some point, but is still the most alert dog in the pack. Border Collies don't let little things like cancer stand in the way of jobs that need to be done. He knows he's the best dog in the pack and wishes we'd tell the other dogs so everyone knows.
Oliver is the black Lab, who's also fifteen now. He's mostly blind, fairly deaf, has advanced dementia, and has creaky bones, but he's the happiest he's ever been - he's forgotten all the phobias he used to have and now just enjoys his days.
Ava is the fawn greyhound--or Princess Ava to use her full title. She's pretty certain she's my favourite and has little time for the other dogs (or in her mind - the peasants). She's almost ten and came to me with a few injuries (missing a toe, most of her teeth had to be removed, a broken tail), but she's simply perfect. And the only one who likes to snuggle.
Billie--or Billie Ballerina--is the black greyhound. She's almost nine and is one of the most joyful dogs I've known. She was depressed when she came to us, and it took her a long time of watching and being wary before she finally started letting her walls down. Now she dances for joy and loves everyone.
Amy Andrews - 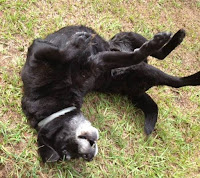 This is Fonzie, our 13 year old black lab. He’s old, completely blind from epilepsy and a bit stiff through the hips in the morning (but then so am I!)  His sister died a couple of years back but he’s still kicking on and happily navigating our back yard with only the occasional disagreement with a tree. We’ve had him since the kids were little and it will be a very sad day in our lives when it’s his time to go but in the meantime we’re getting in as much loving as possible!
Sue Mackay - 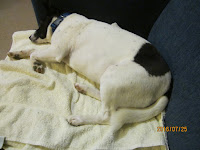 Sam belongs to our friends and is my walking mate. We have just been looking after him while his owners rushed to Australia for a funeral. Here he is very comfortably missing them from our couch in front of the fire.
Michelle Douglas - 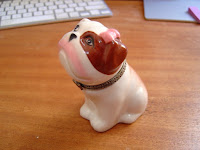 I'm clucky for a puppy, but at the moment I have to make do with a pretend pet. This is Petal. She keeps me company as I type away. I think she looks rather fetching with her pink bow. :-)
Louisa George -

This is Tana, king of well... the world, actually. We are merely here to serve.
Kandy Sheppard - 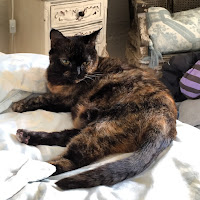 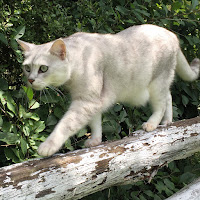 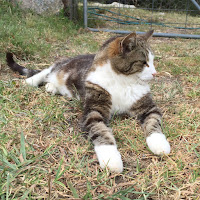 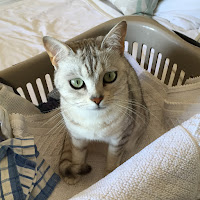 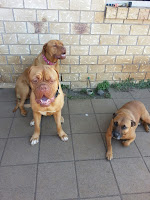 My adorable fur babies, Riley & Boss (Who are both Dogue De Bordeaux's and both rescues) And Max, my Staffy x. Love these three to the moon and back.
Thanks so much for sharing our four legged friends today!
Tell us about your favorite pet!