Today we have a smooch from Louisa George, but first

Can you please contact yvonne@yvonnelindsay.com to receive your copy of Contract Wedding Expectant Bride!


And now for today's Sunday Smooch from LOUISA GEORGE 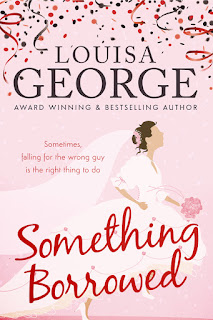 When Chloe Cassidy is jilted at the altar it’s all her nightmares rolled into one. Her mother is convinced she’s the victim of the family curse. Her sister believes she just hasn’t found The One yet. But Chloe’s not listening; she’s too busy taking her humiliation out on the infuriating best man, Vaughn Brooks. Three months later, Something Borrowed—her wedding planning business— is failing. In a last ditch attempt to save it, Chloe is forced to swallow her pride, and work with the enemy: too-hot for his own good, award-winning chef Vaughn. She soon realizes the sparks flying between them are nothing to do with their dubious past, but from something else altogether…

Scene set-up: Vaughn is teaching Chloe how to make bread in his state of the art restaurant kitchen. After one very lovely kiss, he's told her why he can't get involved in a relationship and she agrees wholeheartedly, and yet...

He tore his gaze away and groaned. ‘Right. Er… Are you hungry?’
‘Why are you always trying to feed me?’
‘Because you look too thin, and it’s the best thing I do. I’ll have you know, people pay a fortune to be fed by me.’
Her eyes flicked toward the huge stainless steel fridge. Her food-porn dream. Words got stuck in a dry mouth. She swallowed as she thought about sex by the light of the open fridge door. About hand-feeding each other food. Then she reminded herself that this scenario was very different from her dreams. For one, they’d agreed that neither of them was prepared to actually go there and do that. ‘Yes. Er… Okay. What have you got?’
‘Whatever you want. Come here.’ He took her hand and tugged her to the fridge. Opening it up, he lifted out containers of cooked meat. ‘See, there is everything you could possibly want to eat. Olives? Cheese? Finest prosciutto, from Friuli in northeast Italy. Try some.’ He ripped a piece off and held it out to her.
He wanted to give her food because it was a distraction from the need that simmered in his eyes, she knew damned well. Because he wanted her as much as she wanted him, but he was hell-bent on fighting it. And that was his choice. But it didn’t mean he wanted her any less.
He was Mr Non-Committal; he was going to leave as soon as she found a decent manager for him.  There was no future for them. Whatever they did next would not only be a mark on her heart but on her soul too. She was playing a dangerous game.
But, despite everything, she still wanted to play.
Because not playing this game with Vaughn Brooks would mean a lifetime of regret, of wondering what if? Of wishing she’d had the guts to take something she wanted. So for once in her life, she was going to put herself first.
She leant forward and took the prosciutto from his outstretched fingers—with her teeth. She didn’t know who was more shocked, her or him. So, rather thank thinking about where they were heading, she concentrated on eating the delicious meat. ‘Oh, God, that is amazing. You want some?’
‘Aha.’ There was a subtle shift in his voice, one that told her he wanted more than food. And that stoked the fire in her gut, made her bolder, braver.
She took a piece of the ham and held it to his lips. Without taking his eyes from hers, he leant forward a fraction and took it into his mouth. Then he gave her a smile that was half sexy, half tease and all sin.
‘Anything else?’ She tore her gaze from his and looked in the fridge. ‘Ah… strawberries. Did I ever tell you how much I adore strawberries?’
‘Chloe—’ No kissing. He didn’t say it, but he didn’t have to. It was there in the silence.
But this was eating. Right? Just strawberries, and they weren’t exactly sinful. Unless…
‘I mean, I really, really, adore them. Just irresistible. They remind me of summer… and sunshine… and…’ She ran her tongue over her top lip, then caught her bottom one in her teeth and gazed up at him. His eyes flickered red-hot need and he reached for the container of scarlet fruit.
Flicking off the lid, he lifted a strawberry out and held it to her open mouth, running it over her top lip, then on to the bottom one. Slowly, he placed the fruit between her teeth. She sucked it in, bit down and tasted the intensely sweet juice.
‘Delicious. You try one.’ She did the same to him, watching his throat work as he swallowed. ‘I’d like another, please.’
‘Yes, m’lady.’ Breathing fast, he took another out and ran it again over her lips, then put it in his own mouth. ‘You taste like heaven.’
‘How would you know?’
‘Because I’m pretty damned sure that Heaven would taste of strawberries and wine and sunshine. Like you probably do.’
‘Want to check? Just to be sure?’ Then, unable to resist any longer, she tiptoed and cupped his face in her palms. With no hesitation, she licked a trail across his lips. ‘You taste pretty damned good yourself.’ Then she licked a trail down his throat.
Still no kissing. Not technically.
‘Do that again and I won’t be able to hold back any longer,’ he groaned against her forehead, but still he didn’t kiss her.
So, achingly slowly, just to prove her intent, she licked again, first his bottom lip, then the top.
He edged away a fraction, holding her shoulders as he growled, ‘I mean it, Chloe.’
‘So do I.’
His eyes flickered closed. ‘We should stop.’
‘Why, when I know you want it as much as I do?’
His voice was gravel and stone. ‘Because this isn’t a game, Chloe, and I just can’t give you what you want.’

Something Borrowed is set in Notting Hill, a place I used to live a long time ago and also the setting for one of my favourite movies, Notting Hill. Have you ever been to a movie set/setting? Did it live up to your expectations?