Today we have a smooch from Kate Hardy but first


... the winner of last week's Sunday Smooch Giveaway is Sister. 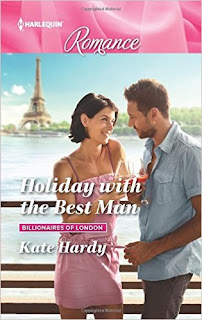 Two weeks with the billionaire!

The moment has come when best man Roland Devereux must follow the bride and groom and dance with bridesmaid Grace Faraday. But as he takes her hand, the chemistry hits him. For the first time since he lost his wife, he lets his guard down.

Roland can see that gorgeous wallflower Grace deserves to be swept off her feet. He makes a deal—he'll give her a two-week whirlwind holiday, and Grace will help him learn to date again. Except somewhere between Paris and Venice, Roland realizes two weeks with Grace will never be enough…


Scene set-up: [The deal is that Roland sweeps Grace off her feet for two weeks; and in return she helps him brush up his dating skills. (She's staying at his place while hers dries out after a burst pipe.) They've just been to see a rooftop movie, and now they're talking films: and this is what happens next…]


They walked hand in hand along the river frontage in easy silence, watching the play of lights on the water. Grace thought wistfully, if only this was real. But that wasn’t the deal, and she needed some space to stand on her own two feet again and work out who she was and what she wanted from life. So for now she’d just enjoy the moment. Two weeks of being swept off her feet. Wanting more was just greedy.

‘I had a really good time tonight,’ Roland said.

‘Even though it’s not the glamorous kind of stuff someone like you is used to?’ she asked.

‘It was fun,’ he said. ‘You put a lot of thought into it and came up with something original and different that I really enjoyed. Anyway, it doesn’t have to be super-glamorous or cost a lot of money for it to be a good time – like now. There’s nothing better than walking by the river at night watching the lights on the water, and that doesn’t cost anything.’

‘Is this the sort of area where you’d live, if you had the chance?’ he asked.

‘Are we talking about my dream home? That would be a pretty little Victorian terraced house, filled with the kind of curtains and cushions you hate most,’ she said. ‘If I won the lottery, I’d want a place that overlooked somewhere like Hampstead Heath, or have one of those gorgeous houses in Notting Hill that have access to a pretty garden.’

He stopped and turned to face her. ‘Like the one in the film where the movie star kisses the ordinary guy?’

‘I guess,’ she said, and she couldn’t help staring at his mouth. Except he wasn’t an ordinary guy and she wasn’t a film star.

She only realised she’d spoken aloud when he said, ‘I’m ordinary enough,’ and leaned forward to kiss her.

Time seemed to stop. And she was super-aware of his nearness – his clean male scent, the warmth of his skin, the way the touch of his lips made her skin tingle.

A cat-call from a passing teenager broke the mood, and he took a step back. ‘Sorry.’

‘It’s fine to kiss your date in public,’ she said, striving for cool. ‘Except maybe not as, um…’ How could she tell him that he’d made her feel feverish, without giving herself away. ‘A little cooler might be more appropriate,’ she said.

‘Noted.’ But his pupils were huge. Was that because of the darkness around them, or had kissing her affected him the same way it had affected her? She was way too chicken to ask. 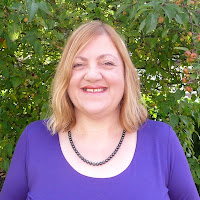 For a chance to go into the draw to win a copy of Holiday With the Best Man, leave a comment telling Kate how you would most like to be swept off your feet?

Come back next Sunday, when the winner of today's giveaway will be announced and a smooch from Jennifer St George will be posted!