Today we have a smooch from The Wedding Wager by Barbara DeLeo but first the winner of last week's Sunday Smooch Giveaway is LynW. Lyn, we know you already have a copy of Jennifer's book but she will send you something else. 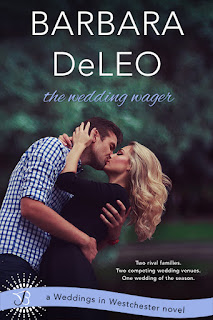 Nick Katsalos has a foolproof plan to save his parents' floundering wedding venue. The last thing he expects is for Erin O'Malley, the captivating daughter of his parents' biggest rival, to waltz in and charm the client who could finally get the family business back on track. Nick would be furious--if only he could stop thinking about her.

When Erin and Nick enter into a wager to determine who will win the contract she prepares for the worst...and is surprised by the glimpses of warmth she sees in the man behind the numbers. But Erin isn't about to forfeit what could be the biggest wedding of the decade to a man as cold as Nick. Especially since securing it means she could finally prove to her father she's just as capable of handling the family business as him.

But as the competition heats up, Erin and Nick must decide what's more important—winning or love.
Each book in the Weddings in Westchester series is a standalone, full-length story that can be enjoyed out of order.

Scene set-up
Erin and Nick are meeting in a bar so a photographer can take a picture of them for the magazine story about their business rivalry. Before the photographer arrives, some other business ensues...


Smooch
Suddenly his face changed. The corners of his mouth turned down, and his shoulders dropped. It was a look she hadn’t seen before and it stopped her mid-sentence. Until now he’d been wearing a mask—a confident, inscrutable facade that no one would ever see beneath. Now he looked concerned, hurt even.

“Erin, I do respect you. Obviously way more than I’ve made clear. Your professionalism, your drive, your determination—I don’t mind admitting it’s those things that are driving me a little crazy for you.”

He wasn’t joking. She knew by the tone in his voice and the set of his body that he meant every word. And it melted her from the inside out.

“What does that mean?”

He tilted his head and gave her a look that made her feel as though he could see right into the most secret parts of her. “It’s pretty easy to get most people’s number, work out what makes them tick, how the sum of their parts will add up to a neat solution. Not with you.”

“That’s an original pickup line.” Her  fingers drummed rapidly against the bowl of her wineglass.

He chuckled and shrugged. “I’m a mathematician. What can you do? But at the very least you should take it as a compliment. I will work you out, Erin. I’ll  find your variables and your points of differentiation. By the time we’re through, I guarantee I’ll have you summed up.”

He stepped closer and still she held her ground, but now her cells were screaming for her to lean into him, to taste his mouth and to feel his body beneath her  fingers.

Instead, she squared her shoulders. “That’s just about as arrogant as anyone could possibly get. Being so certain that just because you work with numbers and percentages you can work people out. I can tell you now, a guy like you would never understand a woman like me.”

Instead of bending his face toward her as her body wished he would, he reached out and twined his fingers with hers. “If you really don’t think there’s anything happening here, then I’ll accept it, but no matter what happens, I don’t ever want you to think that I don’t respect you, Erin. You couldn’t be more wrong.”

She swallowed as he squeezed her hand and all her blood seemed to pool where they touched. He was smiling at her, and all she could think was how much she wanted his mouth on hers. There was something about Nick Katsalos that drove her crazy, and she didn’t know how to stop it. And then she squeezed his hand back.

Before she could think about what she was doing, they were kissing, her hands around his neck, his arms around her waist.

She’d imagined he’d taste heavenly, but she’d expected the bitterness of beer on his lips, not the sweetness of ginger and honey. When his tongue pressed along her bottom lip she thought she might crumble. As if she were in some sort of vacuum, the noise of the bar around them disintegrated, and all she could hear was his breathing and the rush of blood in her ears. He pulled her closer, his hands splayed across the bare skin of her back and she pressed herself to him.

Moments later, when they sprang apart, it was as if they’d broken the surface of a pool and the noise of the bar, and the heart-pounding reality of what she’d just done came rushing up at her. 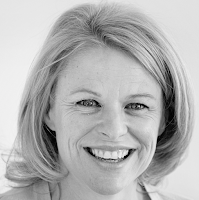 There's  an e-copy of The Wedding Wager to give away to one commenter today! Just tell me your most memorable experience from a wedding you've been to and I'll put your name in the hat!

Come back next Sunday, when the winner of today's giveaway will be announced and a smooch from One Night with the French Tycoon by Christy McKellen will be posted!