I Have Walked One Hundred Miles

Last month I blogged about my new acquisition, a treadmill desk which I hoped would be the ultimate multi-tasking, time-saving tool: working and exercising at the same time.  Huzzah.  Four weeks later I am reporting, as promised, on how that is working out. 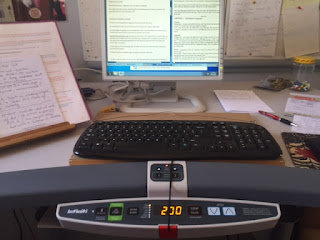 In order to report, I've been recording my daily stat's...although I didn't realise until a couple of weeks in that the default setting is miles and not kilometres.  According to the manual, I can switch to metric but since I'd started recording miles I decided to stick with miles.  Also, the Proclaimers' song is a jaunty walking singalong in miles, not kilometres. (Sorry if the title has created Scottish ear-worms!)

I've walked while working on 20 days for a total of 60-and-a-bit hours, averaging 3 hours walking per day.  Fewer hours than I would like, so I am setting a goal of getting this up to 4 hours per day during May.

The good news is that during those 60 hours, I have walked almost 335,000 steps and 106 miles.  Hence the title of this post: I really *have* walked one hundred miles (and a few more) during April.  Cool, right?

My average speed works out at 1.76 miles per hour which is quite a dawdle.  My farmer husband says even sheep walk faster than this but they're not typing while they walk, are they?  Nor are they scribbling notes and pausing to consult the thesaurus and coming up with brilliant (or not) character motivations. Anyway...

According to the treadmill, my month of dawdling has burned a total of 4,618 calories.  Let me put that in terms we all understand. 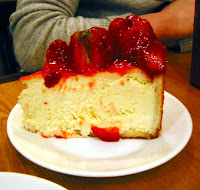 Suffice to say that 4,618 calories is quite a few slices of cheesecake or scoops of ice-cream or pastries or chocolates but actually I've been eating less of these.  Partly it's the walking, partly it's the recording of numbers, partly it's knowing how far and for how long I need to walk to make up for the cheesecake.  I've been eating less snacky foods, drinking less coffee and sleeping better. Bonus: I've  lost a satisfying two kilograms without trying too hard.

It did take most of the month to reach a level of comfort with typing while I walk.  If I had been able to work at it every day, for several sessions every day, then I'm sure this settling-in would have been quicker.  But this past week I've been able to lose myself in the work, to not realise that I'm walking, to not notice that an hour or more has passed since I last checked the clock.

Give me another month and I will have this working-while-I-walk mastered.  That is the plan.

PS:  I've become slightly addicted to the numbers, to adding them to my spreadsheet and watching them add up, so I may continue recording for a wee while longer.