And now for today's Sunday Smooch from The Billionaire Claims His Wife....


Amy says - This is a medical novella of mine from quite a few years back that was re-released digitally last year with a fertility expert hero and a vet heroine. Nathan is the first billionaire I ever wrote and because I didn't know how to write such a wealthy man I struck him down with a horrible flu and left him ill and naked and at the mercy of Jacqueline, his hippy ex :-)  Unfortunately they put an ugly, non-cover cover on it and its rotted in obscurity  :-(  but a new cover is coming which I'm very excited about so please ignore the non-cover below :-)


Blurb - Successful and sexy, Nathan Trent is a man who has everything, except the wife he loved and lost! Now he wants her back - to help secure a vital business deal - and Jacqui reluctantly agrees. Neither expected their temporary 'reunion' to be so shockingly hot - or for Nathan to ask her to stay 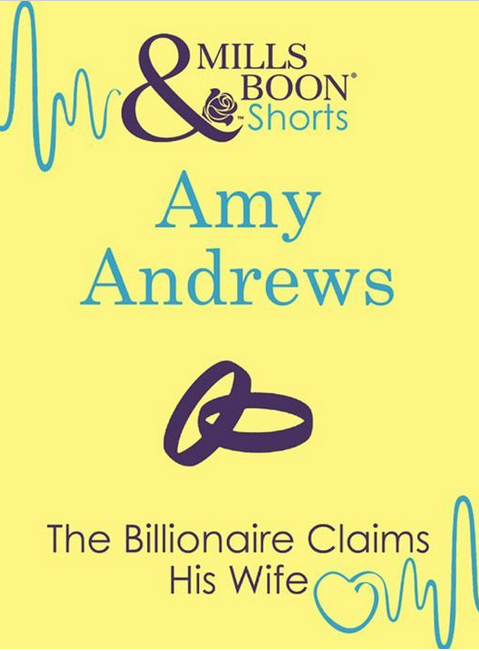 Scene set-up
Nathan and Jacqui are going out to dinner with a business associate who thinks they're still married.....

They left the apartment and entered the lift. It ascended and dinged shortly after and Nathan gestured for her to precede him. “Now remember, we’re newly reconciled,” he said moving down the hallway with her. “Are you sure you can carry that off?”
“I’ll be fine,” Jacqui nodded.
She was surprised to hear the sudden edge of tension lacing his voice.
“Really?” He stopped at Vince’s door. “I don’t think I can stress how important this is, Jacq.”
That much was obvious. “Relax. Trust me.”
She knew she could keep her end of the bargain. Memories of loving Nate came easily. But he was suddenly looking too tense. Too serious. She frowned. Where was Mr-Sure-Of-Himself? Shouldn’t she be the nervous one?
If he went in there looking like this he would be the one to blow their cover, not her.
Nathan looked at her for confirmation his gaze falling straight down into the deep v of her cleavage to the unfettered splendour beneath. Oh god, how was he supposed to concentrate on pulling this off when she was braless?
“Jesus, Jacqui. Couldn’t you have least worn a bra?”
Jacqueline arched a brow unsure of whom this uptight man before her was. What the hell was the matter with him? She had to do something. Fast. Then she smiled.
She casually pushed the door bell and turned to him. “That’s nothing.” She took a step closer so their bodies were touching and raised herself slightly on her toes, pressing her mouth against his ear. “I’m not wearing any underwear either.”
Nathan felt the breath stutter to a halt in his lungs as a surge of pure, high-octane lust zinged at warp speed through his system. He pulled away slightly.
“Jacqui.”
His husky warning curved her lips further. She pulled his head down and slammed a kiss against his lips that she hoped would live with him way after the ink was dry on their divorce papers. His greedy response, the plunder of his tongue and the harsh suck of his breath told her it just might.
Jacqueline pulled away satisfied with the result even if naked need roared in her head urging her to continue.
Now he looked like a man who’d been in bed for a week with a lover.

For a chance to win a digital copy of The Billionaire Claims His Wife tell me are you a fan of an alpha male or do you prefer a nicer Beta? Leave me your answer in the comments and I'll put you in the draw.

Also, if you like this and want to know about any of my upcoming releases - I have 4 in July!! - then you can click here and sign up for my newsletter.