Today we have a smooch from  Dishing up Desire by  Barbara DeLeo, but first ...

And now for today's Sunday Smooch from Barbara DeLeo 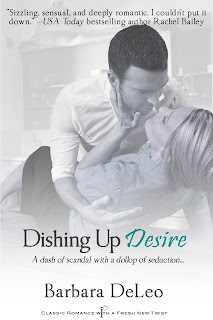 Image consultant Blake Matthews is facing his toughest PR challenge yet: salvage the image of celebrity chef Kirin Hart. Once he does, he'll be able to acquire LA's most successful PR firm.

But Kirin's no easy fix. She's stubborn about changing her comfortable homemaker image, and is being sued for sexual harassment by a junior staffer. She needs a PR lifeline fast. Only problem is Blake wants more than to make her over...

Kirin doesn't need a makeover--her fans love her as she is. But she could lose everything if the sex scandal and reputation that has followed doesn't get quashed right away. Kirin agrees to let model-perfect Blake work his magic for two weeks, but things get complicated when she can't deny the way her body flares to life whenever he's near.


This is the scene from the cover of the book :-) For the first time, Kirin is telling Blake what happened before she was accused of sexual harassment. It's the first time she's opened up about her late husband as well.


“When Trent made the allegation that I’d made a pass at him at a Christmas party I was so shocked that I wasn’t sure I hadn’t done something wrong. Had I stood too close? Touched his arm for too long?”

The confusion on her face and the hesitation in her voice caused his chest to constrict and he burned to take all the pain away for her. Be the one who’d fight for her. “Did he make the allegation to other people?”

“He went to my HR manager, and she reported it to my board. It was humiliating but I’d thought we’d resolved it. When he applied for a promotion a couple months later and he didn’t get it, he said the harassment had continued and that I’d sidestepped him for the job because he refused to sleep with me. That’s when my lawyer advised an out of court settlement to make it go away.”

Blake put the ornament on the counter beside her and touched her arm. The soft skin warmed his hand and he curled his fingers to feel more of her. “You didn’t believe that jerk? You didn’t think you were that cold, hard woman he said you were. Or that you’d treated him badly.”

Of course she did. It was written in the lines by her mouth and the uncertain look in her eye. And it made him want to pull her close and whisper how wrong she was. “I don’t know.”

“Kirin you can’t believe him. From the very first day I saw you I was awed by your self-confidence, your drive to put your business back on the right track. That’s what blew me away about you. And I bet those were the things Bray wished he’d had for himself.”

“I haven’t had sex in five years.” Her words were a whisper.

Had he heard her right? He shook his head. “You don’t have to tell me all this. I shouldn’t have asked.”

“No, I think you need to understand, because it’s impacting on your work here.”

He left his hand on her arm and stroked the underside with his thumb while she continued.

“Joe and I grew apart and didn’t have a sex life for years. And the couple of guys I dated after he died only wanted to be seen with me to advance their own careers. When all this happened with Trent I wondered if maybe he was right. Maybe I am a frigid bitch. I think that’s why I can’t do all this sexing up stuff.” She hooked him with her liquid caramel eyes and he dragged his thumb across the smooth skin at her wrist.

“I’ll never believe you’re not a sensual woman. Not in a million years.”

For an endless second she looked at him and the saucepan lid chattering on the stove matched the beat, hard and heavy, in his chest. He stepped forward and cupped her cheek in his palm. “You’re beautiful, Kirin. You’re desirable to any man. Don’t doubt that for a second. A lot of what you and I are doing together is finding the closed part of you, bringing it out in the open so you’re confident in the whole of yourself. So your fans can see the real you.”

He dipped his face closer, and the air between them sparked. Nothing mattered more right now than being as close to her as he could get. “We can find it together.” Before he had another thought, his mouth was against hers. He slid his tongue between her lips, and the small sound she made in the back of her throat fired him hotter. He dragged her close and devoured the honey- sweet mouth he’d been watching and wanting.

Her fingers threaded up his neck and she pulled him towards her until they were chest to chest, jammed against the counter top. He deepened the kiss, the warm scent of freshly cut tomatoes and citrus shampoo causing it to become a feast.

In a dance of tongue and lip, his mind fogged, his only focus the way his skin heated under hers, his pulse rushing. Wanting more of her, he dragged himself from her lips then kissed a line from that sweet, lush mouth, down her delicate jaw. He pushed back the drape of hair and nuzzled the milky skin of her neck. The flutter of her pulse against his lips fired him on. 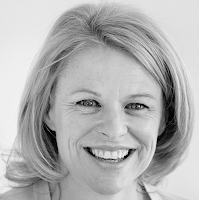 The ornament that Blake is holding in this scene is a Batman salt shaker. Kirin collects salt and pepper shakers of famous couples. To be in to win a copy of Dishing up Desire just tell me if you collect anything or what you'd collect if you could!


Come back next Sunday, when the winner of today's giveaway will be announced -- and a smooch from Date with Destiny by Helen Lacey will be posted!
Posted by Unknown