the winner of last week's Sunday Smooch Giveaway is -- Tash!


Can you please contact Amy Andrews on ....... amy (at) amyandrews (dot) com (dot) au to receive your copy of Taming The Tycoon!


And now for today's Sunday Smooch from Rescuing Dawn by Nicole Flockton........

He helps save lives, now he wants to save hers.

Dawn Granger has loved and lost and it’s a road she’s not prepared to travel again, that is until her 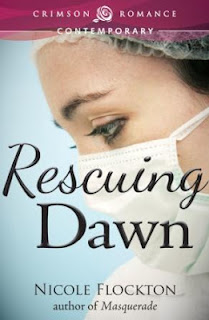 past turns up and has her questioning her resolve.
Andrew Holmes has sailed the globe numerous times, when he almost loses his life, he decides he needs to give something back so he returns home and trains as a paramedic. When he runs into his former sweetheart he is surprised to find an attraction he thought dead come to life. When he sees the sadness in Dawn he knows he will do anything to make her smile again.
Dawn tries to resist Andrew but their past pulls at her in ways she thought long dead. Can she trust a man who's run out on her once before? Can she risk putting her heart on the line again? Or will it all be taken from her again.


Scene set-up: [Dawn and Andrew are out having a coffee date – their first ‘date’ in ten years. Ever since Andrew saw Dawn in the ER again, he’s been pestering her to meet him. She’s finally given in and agreed to met him. They’re getting ready to leave and Andrew is trying to convince Dawn to see him again]

“I don’t know.” Fatigue hit her and she knew she had to get home soon, otherwise she’d be falling asleep in her car and that wouldn't be good at all. “I just don’t know. I can’t think straight when I’m tired.”
“Fair enough.” He looked at his watch and grimaced. “It’s getting late, if you could call nearly eight-thirty in the morning late. I'm sure from all that you've told me, being awake at this time isn’t normal for you. I’d offer to drive you home, but I need to be at the station in five minutes.” He gulped down the rest of his drink and slid along the bench seat.
Following suit, Dawn gathered up her handbag. “Thanks for the hot chocolate and Danish.”
Andrew grabbed her hand and helped her as she slipped out of the booth. “Believe me, the pleasure is all mine.” She had to stop the shiver that threatened to overtake her body when he tucked a finger under her chin and lifted it. She looked deep into his eyes, almost drowning in the sea of blue radiating towards her, like an incoming tide. “Promise me you’ll think about what I said, about getting to know you again.”
Speech was impossible at that moment so she just nodded.
Andrew grinned a little wider and cheekier. “Perhaps this will help the decision along.”
Dawn was frozen to the spot as she knew what was about to happen. He lowered his head and as his lips touched hers softly her eyes drifted shut. She sighed, opening her mouth a fraction to give his lips better access to hers. Her skin tingled and warmth started to fill the places that had been cold for so long. She gripped her handbag a little tighter. She wanted to wrap her arms around him, deepen the kiss.
But as quickly as it started, the kiss was over and Andrew was stepping away, taking the warmth she wanted so desperately with him.


As she opened her eyes she became aware of where they were, in the middle of a busy café. Fortunately no one seemed to have noticed the kiss they’d shared, unless they were being polite. Andrew took a firmer hold of her hand and led her towards the exit. She forced one foot in front of the other and eventually her body’s instinct took over and she was able to leave the café without crumbling in a heap on the ground.

Nicole is giving away an eCopy of Rescuing Dawn to one commenter who answers this question - Have you ever had someone pester you to go on a date?

Come back next Sunday, when the winner of today's giveaway will be announced -- and a smooch from How To Resist A Heartbreaker by Louisa George will be posted!
Posted by Helen Lacey