Celebrating The Love Deception with Some Traditional Caribbean Cheer 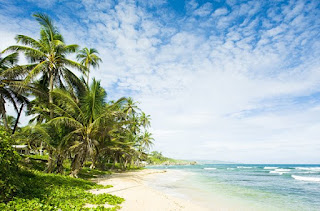 It’s the launch week of my new release, The Love Deception, which I’m just a tad excited about. Part of the book is set in Barbados.  Sadly, I’ve not been to the Caribbean, but my sister-in-law, Lisa, is part Jamaican so I was able to quiz her on all things Caribbean for the story.

As this week is a celebration, she’s shared a special recipe with me, Caribbean Guinness Punch. This is what Lisa says about this concoction:

‘My grandfather's housekeeper used to make this fairly regularly.  It's quick to make, but the hardest part was waiting for it to chill. This "health" drink was supposed to give you vigour. I remember my first taste…all creamy and a hint of sharpness from the Guinness - magical!’

So here is how to whip up this tropical magic:

Method:
• Break and beat the raw egg in a bowl
• Place the Guinness, egg and condensed milk in a blender and mix
• Pour the drink into a jug
• Add cinnamon and nutmeg
• Stir lightly and cover
• Place in the refrigerator to chill.
• Serve cold over a few cubes of ice

My heroine, Felicity Carter and my hero, Damon Fullbright don’t get the chance to try Caribbean Guinness Punch but they do eat in a fabulous ocean-front restaurant. Seafood is a specialty of the region and Felicity enjoys a platter of coconut shrimp followed by Cajun salmon with pesto cream sauce, grilled zucchini and tomato salsa. She doesn’t get time to eat dessert as disaster descends.

I wrote The Love Deception a few years ago and entered it into a number of competitions.  This scene was consistently commented on as a favourite. So, here’s a taste:

‘I can understand now why you didn’t want to hire me.’ Defeat and shame suffused her words.
‘Mmm.’
‘I don’t know what happened.’
‘Not your usual behaviour?’ His voice softened from rock hard to gritty gravel.
‘No.’ She flicked furiously at her eyes with her fingertips. Great, now she might cry in front of him. ‘I never behave that way,’ she said. ‘Never.’
Damon sat. He studied her carefully. ‘I suppose everyone makes mistakes.’
Mistakes! He’d just earnt a lifetime of gratitude for his understatement.
‘Yeah, but stripping in front of your future boss, while so drunk you don’t know what you’re doing, has to be a career-killing move.’
‘I hope your work is as good as your dancing.’
Her heart pulled back on the throttle. A joke. At a time like this. After her accusations, she wouldn’t have blamed him for calling Security.
‘I’ll do anything to prove I’m not that person.’ She sounded pitiable and needy, but he had to be convinced.
‘I can’t simply forget what happened.’ His voice had lost its accusatory edge. ‘I’m not convinced that night was just a one-time thing.’
‘I understand.’
‘Show me what you’ve got professionally, and we’ll see how things work out.’
‘Thank you.’ The oxygen levels improved. She breathed a deep, controlled and calming breath. ‘I won’t disappoint you.’ Her gaze slipped slightly off-centre. Left and down. ‘I promise.’
‘We’ll see.’
She stood and walked to the door. Opening it, she turned.
‘Thank you.’
‘Don’t let me have cause to haul you back in here for another dressing-down,’ he said.
She hoped from now on they could omit any mention of dressing, or lack thereof, from their relationship.
‘You can count on it.’
But she lied. Damon was probably only days away from discovering who she was. Then this little fracas would look like a flicker next to a nuclear explosion.

Do you have a traditional family recipe or an old faithful (you know the one that makes you look like Nigella in the kitchen). Leave a comment for a chance to win a copy of The Love Deception e-book.