I hadn't actually  intended writing a blog about Zombies....but yesterday I saw the trailer for Brad Pitt's new movie, World War Z. It got me thinking how the humble Zombie seems to have become the favourite monster of the moment, taking over from the avalanche of vamp and werewolf movies and books from the past five or more years.

So I Googled Zombies and discovered a whole lot of information about these undead, slow moving, unkempt, often moaning creatures I certainly would want to come face to face with.

According to Wikipedia - Zombies are fictional undead creatures regularly encountered in horror and fantasy themed works. They are typically depicted as mindless, reanimated corpses with a hunger for human flesh, and particularly for human brains in some depictions. Although they share their name and some superficial similarities with the zombie from Haitian Vodun, their links to such folklore are unclear. Many consider George A. Romero's seminal film The Night of the Living Dead to be the progenitor of these creatures. 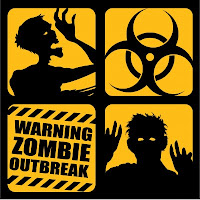 Why have these creatures become so popular? I mean, they're not mysterious and sexy like a vampire or strong and powerful like a werewolf. Is it that they are a simple enemy? Not easily conquered but easily understood? With vampires morphing from the creepy Boris Karloff to the seductive and angsty Edward Cullen over the course of a couple of generations, or werewolves no longer being mindless animals simply out for blood, it's easy to see why the zombie has become so popular.

Did you know there was something called a Zombie Walk? Where a large group of Zombie enthusiasts get together in costume and act out zombie moves? Here's the link. https://en.wikipedia.org/wiki/Zombie_walk

Zombies, it seems, are suddenly cool.

Are you a zombie fan? Do you have a favourite book or movie like Shaun Of The Dead or I Am Legend? Will you be going to see World War Z?
Posted by Helen Lacey