Today we have a smooch from A Girl Less Ordinary by Leah Ashton, but first ...

Congratulations, Rachel! Can you please contact Annie West at annie (at) annie-west (dot) com and she'll send you a copy of Defying Her Desert Duty.

And now for today's Sunday Smooch from A Girl Less Ordinary by Leah Ashton... 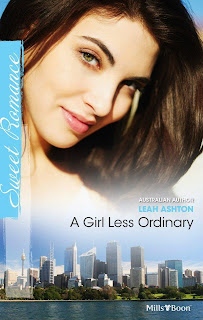 She dreamed of being a girl less ordinary…

Eleanor had worked hard to transform herself from the sad, lonely girl she once was. Switching braces for a breathtaking smile, dowdy clothes for fabulous dresses, and heartbreak for flirty, fun-only dates, she’s now Ella! But one man can see through her glamour-plating to the real woman beneath.

Fiercely private billionaire Jake Donner has never forgotten Ella, and he’s shocked to see how she’s changed. Sparks begin to fly as old memories haunt Ella and Jake – for the innocent attraction they’d once resisted is all grown up and won’t be denied again…


Set Up: Best friends as teenagers, Jake and Ella hadn't spoken for more than a decade, before Ella begins work as Jake's image consultant. Tonight is the last night of their working relationship - a launch party, where newly transformed Jake is the star attraction. But slowly they've been growing closer, and after a near miss on the dance floor, Ella is now making a rapid retreat...

“Ella,” Jake said, much more forcefully this time, strong enough for her to pause at the landing and turn to face him.
“What?” she asked, as he came to a stop before her.
But he didn’t stop. Instead, he came closer, as close as they’d been on the dance floor.
And then, when her shoulders bumped against the wallpaper, even closer again. Close enough that his height and width seemed to surround her, overwhelm her.
His closeness made her traitorous body react in all the wrong ways:  her belly flooded with warmth, her breath hitched, her hands itched to reach and touch him – anywhere – and bring him even closer.
No. That was crazy. This was crazy.
She didn’t want any of this. After today – the end of Jake’s Re-Branding Program – she was meant to never see Jake again.
And she’d been glad. Relieved about that. Hadn’t she?
But this – feeling this, wanting this - was not good at all.
“Jake…” she started, but the touch of his hand on her cheek silenced her. His fingers slid down slowly, the lightest touch at her temple, her cheek, her jaw, and then finally, beneath her chin, tilting her mouth upwards. Up towards his.
She swallowed, trying desperately to capture just one lucid, sensible sentence from within a brain that suddenly felt as light and fluffy – and insubstantial – as fairy floss.
But she found nothing. Maybe she didn’t really want too.
“I’ll tell you what I wanted,” he said, his voice like velvet. “And what I want.”
Ella finally let her gaze rise up to meet his – intense, and intimate and hotter than anything she’d ever experienced.
“This,” he said.
Now she expected him to kiss her. Something hard and fast and full of thirteen years of missed opportunities, mistakes and regret.
But that wasn’t what she received. Instead he lowered his head ever so slowly.
She had the strangest sense that she was about to fall - into the heat she saw in his eyes, into the sensations that zipped about her body, and perhaps even into somewhere further - somewhere deep inside her that for far too long she’d ignored.
And while it was scary and confusing and complicated, the absolute last thing it felt was wrong.
So when his lips finally touched hers, she let herself go.
This was not the kiss of a fumbling, unsure teenager. Oh, no. This Jake was all grown up.
His lips were firm and sure, but not demanding – yet.
He teased her with kisses that were brief, almost chaste, teasing her until she leant into him, until her hands crept up to his shoulders, one remaining to trace the shape and strength of his back, and the other travelling up and into his hair.
But not for a moment did Ella think he was giving her control. This was his kiss, of that she had no doubt. He was, however, giving her time.
Which was all very nice of him, but completely unnecessary.
Her fingers tightened as she tugged him closer, just as his tongue brushed her bottom lip. She shuddered at that unbelievable sensation, and the next thing she knew their kisses were open, voracious and delicious. Their tongues tangled as their sighs - even their breathing – became near indistinguishable as his or hers.
Then he finally touched her, with hands that made her skin burn and the thin fabric of her dress seem an impossibly unfair barrier to the kind of closeness she suddenly desperately wanted.
Skin to skin.
As his fingers traced the curve of her hips, the dip of her waist, and then, ever so slowly, crept higher – but nowhere near high enough – that want became a need.
“Ella,” he said, so close she felt as well as heard him speak. That was all he said, but she knew exactly what he meant.
This was crazy.
She kissed him again, telling him with lips and tongue and teeth how good this felt, how every touch of his hands, every touch of his mouth triggered a rush of sensation that was like nothing else she’d ever experienced.
This was insane.
But then, one moment she was all but wrapped around him, the next he was stepping away, turning his back.
Ella swallowed a whimper. A whimper?
Since when did Ella Cartwright whimper?
As she processed that unexpected, and previously undiscovered, reaction, her surroundings slowly came back into focus.
They were standing in the landing of a staircase. A public staircase.
“I thought I heard someone,” Jake said. 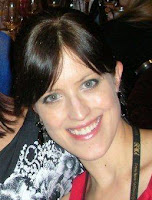 To be in the draw to win a copy of A Girl Less Ordinary, tell me about your high school crush! Did it work out? End in a kiss? Or were you like me, far too shy (and bumbling!) to do anything about it? :)

Come back next Sunday, when the winner of today's giveaway will be announced -- and a smooch from  The Patter of Paws at Christmas by Nikki Logan will be posted!
Posted by Leah Ashton