Today we have a smooch from A Puppy for Christmas by Nikki Logan, but first ... the winner of last week's Sunday Smooch Giveaway is -- Jen St George! Congratulations, Jen Can you please contact leah (at) leah-ashton (dot) com and she'll send you a copy of A Girl Less Ordinary.

And now for today's Sunday Smooch from the three-story A Puppy for Christmas anthology, a novella by Nikki Logan called The Patter of Paws at Christmas ...

Vet nurse Ingrid Rose has to spend Christmas and New year with gorgeous French zookeeper Gabriel Marque. They need to keep watch for the zoo's first litter of wild dogs. Will the patter of so many tiny paws bring them together...this time forever?

What you missed...
One-time-only lovers Gabe and Ingrid haven’t spoken to each other in 18 months. But now they’re rostered together by their zoo employers on a 24-seven observation shift on the endangered painted dogs. They just done something totally against the rules to save the pups' lives by getting them to switch from a dangerous den to a safe one and, in the chaos, Ingrid’s phone slipped to the floor of the pup-filled den, still connected to Gabe’s and then got locked in there. He’s come skidding back in the door--adrenaline pumping--to make sure she’s safe.


Ingrid opened her mouth to speak and Gabe pressed dirty fingers against her lips with one hand and set his phone to mute with the other. Then he lowered his fingers, but not far. He rested them on her cheek.

‘A pup has moved over,’ she whispered, excited.

He nodded and concentrated even harder on the sounds coming from her phone. More mewling. More pawing and then the phone muffled as though someone had sat on it.

The mother’s in A-den! Gabe’s wide eyes echoed her thoughts.

A flurry of rearrangement followed and the high-pitched chatter from the pups continued. They rediscovered the phone and mouthed it and smothered it and generally explored the new toy. And then—just when she and Gabe had come to rely on it—someone rolled onto it and the signal disconnected.

Ingrid stared at Gabe. ‘They hung up on us.’

He laughed first, quiet and low now that the pups were just a few feet away, and that only made it all the funnier. Ingrid joined him, trying hard not to let it out. His hazel eyes sparkled with a mix of emotion as the adrenaline dump faded away, but he kept them locked on her.

They stared at each other for a dangerously long time.

She sat back. ‘The number of pups I saw.’

His eyes widened. ‘You saw them?’

‘I saw fur and eyes. Just for a moment. It was hard to distinguish individual shapes but I’m playing it back in my head and I’m sure there were five or six pairs of eyes.’

‘How did they look?’

He snorted. ‘I think we all were. Mjawi looked terrified but she ran me down anyway.’

There was something engagingly attractive about a man who was perfectly willing to admit when he was frightened out of his skin. ‘Show me?’ she said.

They played the footage back and Ingrid mentally followed along what was on screen with what she’d been doing and heard underground. The moment Gabe entered the exhibit and started calling out, Mjawi shot like a bullet out of the den, paused and crouched low as she spotted him and then pelted straight for him. Brave, given her pack was entirely absent, but determined to protect her babies. Ingrid could only imagine the pressing conflict of having a predator so close to her litter but knowing the den was crumbling around them, too. Wild animals were nothing if not outstanding prioritisers.

On-screen, Gabe flung himself back into the night quarters and slammed the door shut. Mjawi skidded up against it bodily. Then she turned and jogged straight back to her litter.

Gabe snorted again. ‘Tell me about it.’

‘We’re going to get in such trouble.’

He shook his head and locked eyes with her. ‘I don’t care. Do you?’

Did she? Breaching procedure like that and putting themselves at risk was, technically, a dismissible offence. She’d just poised the career—the organisation—that meant so much to her right on the edge of the toilet bowl and pressed flush. Everything she’d worked for. Everything she’d planned for.

They’d done the right thing. They’d saved the pups. If they got drummed out of the zoo for that it was a pretty good way to go.

His smile then just amplified the reward of what they’d done. ‘Thought not.’

And then, before she could do more than take a hasty breath, he leaned in and breached the short distance between their seats and kissed her. Hard. Hot. All that nervous energy had to go somewhere and so Ingrid gladly let it flow straight into her. Deep down into that place that had been cold and empty ever since she’d last let it fill with Gabe’s energy.

His fingers forked up into her hair, closed gently around the strands and eased her head back so that their mouths could fit together better. Ingrid curled her fingers in the two halves of his shirt to pull herself closer to him. One of them was officially on shift and so one of them was being highly unprofessional but she didn’t know who and, as his lips moved over her skin, she really didn’t care.

Her usual standards didn't stand a chance when Gabe was around.

'I've missed you,' he whispered when finally they had to breathe. 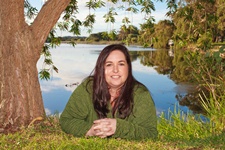 To be in the draw to win a signed copy of A Puppy for Christmas, let me know what the best Christmas-to-NewYear experience you ever had was. Were you on holiday somewhere amazing? Did you have your first child? Precious days off work? Or maybe you, too, were cloistered up in an underground bunker with a six-foot-two, tattooed French hunk. We can dream....

Come back next Sunday, when we'll post the winner of today's giveaway -- and a smooch from Louisa George!
Posted by Nikki Logan