Today we have a smooch from Strictly Temporary by Robyn Grady, but first ...


Congratulations, Eli! Can you please contact Louise at mail (at) louisecusack (dot) com and she'll send you a ecopy of Daughter of the Dark.

And now for today's Sunday Smooch from  Strictly Temporary by Robyn Grady ... 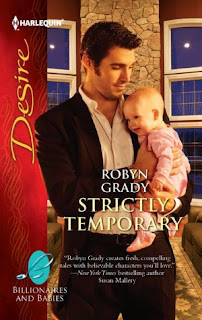 Discovering an abandoned baby in the backseat of a taxi was not on hotelier Zack Harrison's agenda. Luckily, a stunning stranger comes to his aid—and piques his interest. But before Child Services can arrive, a snowstorm strands the trio in Zack's luxurious Colorado cabin.


Trinity Matthews wants to resist Zack's advances, but his care and concern for her and the baby soon have her melting. As the snow falls and the heat sizzles, it's not long before Trinity's sleeping in his bed. And she finds herself wondering if their temporary arrangement could have permanent effects.

“Thing is,” she said. “I don’t have family to fall back on, and sometimes both a mother and father drop out of the picture, for one reason or another. I have friends,” she went on. “Good friends. But no one I’d want to trust enough with a child of her own if something, you know, ever happened. And I have nothing against adoption. Heck, I would’ve loved to have been adopted by a loving family. And, when it’s needed, I can’t slight good foster care.” She took a breath. “Life is about choices. I’ve chosen not to go down that having-my-own-children path.”


Trinity looked from the bed of flickering flames back to Zack.

A crease formed between his brows, he shifted and lay down on his side too. Propped up on an upper arm, he set his jaw cupped in that palm. After a curious moment of his intense gaze skewering hers, she shifted too, and frowned.

“You mean not get married, have children? I thought you sacked the boyfriend because he didn’t approve of kids?”

"That's right. He didn't approve of them at all. I mean, you might not want to be a father, but you like your neices and nephews, don't you? You like this baby?"

"She can be noisy and smelly and has caused me a ton of worry. But sure I like her." He slanted his head and then nodded, "Who wouldn't?"

"I mihgt not plan to have any of y own, but I couldn't spend my life with someone who thinks kids are a waste of space."

His lips twitched. "Bet he didn't like puppies, either."

Zack was kind enough to smile softly. "You were right to ditch him." Then he shifted and changed the subject. “What about your professional life?” he asked. “What are you working toward?”
“One day I hope to be the Editor in Chief of the biggest glossiest magazine around. Basically world domination in my field.” She added, “While staying clear of men who tell bad chicken jokes.”

“No getting away from me tonight.”

She put on a sigh. “Guess I’ll suffer for a good cause.”

The tease in his eyes gradually took on a vaguely different light at the same time the quirk lifting one side of his mouth faded away and the dawn of a different awareness began to ripple between them. The crackle from the fire sounded louder, the rise and fall of his chest became deeper and the air surrounding them started to spark. Pumping in and out of the light, the pulse at the side of his throat throbbed faster and, entranced, her body responded to it all.

Her breasts came alive, swelling, heating. Low inside a delicious ache flowered and grew. She watched his lips part slightly, saw his eyes darken more, then he reached out and a hot fingertip trailed her jaw. That delicious ache spread south – a sweet, raw burn.

When he brushed back hair fallen over her face and his hot palm stayed to cup her cheek, all the oxygen in the room disappeared. Suddenly heavy, her eyelids drifted shut as her body – her very essence - gravitated unerringly toward his. With the lights out, with this extraordinary man she barely knew, everything felt so unreal. So...imminent. She didn’t want to think about who he really was. That before today she would have given him less than the time of day. At this moment, he truly was irresistible.

“Your hair,” he said in a deep drugging voice. “A wave came loose from its tie.”

“Oh.” She breathed in. Out. Then the words just slipped past her lips and she said it. “I thought you might’ve wanted to kiss me.”

That pulse in his throat beat twice as hard and, while she held her breath, he blinked slowly once. “Actually, I’ve wanted to do that all night.” He leaned across and his mouth grazed hers, first slowly one way then the other. “Trouble is,” he murmured, “if I kiss you now, I won’t want to stop.”

She quivered to her pom-pom topped toes and clapped a hand over her scruples’ eyes.

Who said anything about stopping?

But then her thoughts slid back to what had brought them here in the first place. “What about the baby?”

“You’re right,” he agreed even as his lidded eyes drifted shut as he leaned that inch closer and his mouth feathered over hers again. “We should think of our responsibilities.”

But his mouth lingered and as his drugging scent burrowed deeper, Trinity couldn’t recall a single reason why she shouldn’t fan her palm up over his shoulder and bring herself delectably, irreversibly close. When he tasted the corner of her mouth – a deliberate, potent caress - that beautiful ache flooded her core and the last remnants of commonsense shut down. She’d be lucky to remember her own name.

The tip of his tongue slid a deliberate line across the seam of her lips. “Maybe if we just snuggled up?” he said and she felt his grin. “You know. To keep warm.”

When his sandpaper chin grazed up the side of her face and he dropped a kiss on the shell of her ear, the knowledge - the intense glow of longing - was too much. Near dizzy with need, she told him in a husky voice, “I think snuggling would be okay.”

A big palm traced down her side. She heard a sigh – her own - and then he was kissing her in earnest and with an innate skill that left her reeling.

Strictly Temporary is on US shelves in July, Australia and New Zealand in August.

To be in the draw to win a signed copy, leave a comment below:

Have you ever been stuck somewhere with no means of escape?


Come back next Sunday, when the winner of today's giveaway will be announced -- and a smooch from Waking Up with his Runaway Bride by Louisa George will be posted!
Posted by Robyn Grady