In the last week we have lost two of our furry cat pals have. The first was kind of the lovecat mascot – Dorkus – who appeared on the postcards and promo items. The second was my middle “fur-child” Charlie, who passed away yesterday. So I thought I would use today Catwalk to do a bit of a tribute are furry kids.

I asked Dorkus’s pet human, Diane to give me a bit of an insight into his life.

Dorkus wandered into my life in February 1994. I'd been on the phone to mum telling her how it was time for me to get another cat, and my flatmate found Dork a week later, meowing pitifully. Very quickly he was adopted. In 16 years, Dorkus became adept at moving - he lived in 16 different houses and was the master of them all. When I found him a new daddy, he showed him who was boss, and trained him until the new daddy was actually his personal slave. Sometimes known as Psycho Cat for the crazy way he would race up and down the hall, or ambush you from a doorway or the bath, Dorkus loved games with his pet humans. When he was almost a year old, I almost lost him. He'd disappeared and I finally found him under the house next door, in shock, unresponsive and so not like my Dorkus. It seemed he'd had an argument with a garbage truck and when I took him to the vet, the vet said his tail had to be amputated. My flatmate nicknamed him Stumpy Bum, but it added another quirk to his personality.
Sadly, I had to say goodbye to Dorkus last week, and the trip to the vet was his last. At 16 years old, he had a good long life (spoilt brat) and he brought a lot of love into my life. Dorkus was the ultimate lovecat. 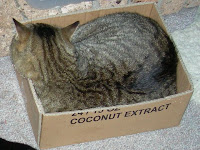 We took him off a lady I worked with. Her cat had 3 kittens and she was a HUGE royal fan. So she had called the kittens Diana, Camilla and Prince Charles. We called him Charlie – he was the sweetest little kitten who grew into the biggest stockiest cat. He was like a shy boy who became a gentle giant.

Charlie was not really a people cat. He liked to hang around but didn’t like to be touched much… I am having a moment while writing this and the tears are welling. I can picture him sitting on the floor beside me as I prepare food for dinner. His purr really, really loud as he looks up at me. Every now and then I drop a piece of meat and his purr would double in volume as he devours his offering. It didn’t matter if he’d just be fed. He loved fresh chicken, and really loved beefsteak, but even if I was peeling potatoes he was there beside me. He had a funny little squeak of a meow. Even though he was bigger than the other cats, he was a sook. The others would dominate him every time.

Really he was a quiet, gentle boy who didn’t like hugs but loved boxes - the smaller the better (see above pic)
And I miss him.
A lot.
Tess 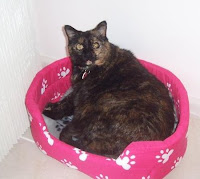 As I write this, it’s been brought to my attention that a friend of the lovecats has also lost a furry friend. Malvina lost Tess on Sunday and we Lovecats want to give her a cat hug.Send hugs here
Posted by Tracie