Today we have a smooch from Miss Prim's Greek Island Fling. 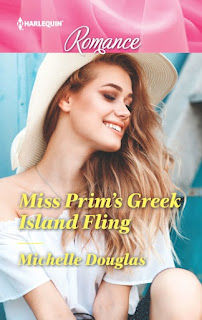 …with her Mr. Wrong!

After a devastating betrayal, Audra Russel escapes to her brother’s Greek island to lick her wounds. Only she soon finds that her brother’s best friend, Finn Sullivan, is vacationing there, too! He may be recovering from a near-fatal accident, but the irresistible daredevil is intent on showing buttoned-up Audra how to have a good time. And now that she’s started, she doesn’t ever want to stop!