Today we have a smooch from Amy Andrews but first ..... the winner of last week's Sunday Smooch Giveaway is Gill Bower!

Gill, can you please contact Michelle at michelle (at) michelle-douglas (dot) com to receive your prize!


And now for today's Sunday Smooch from Nothing But Trouble. 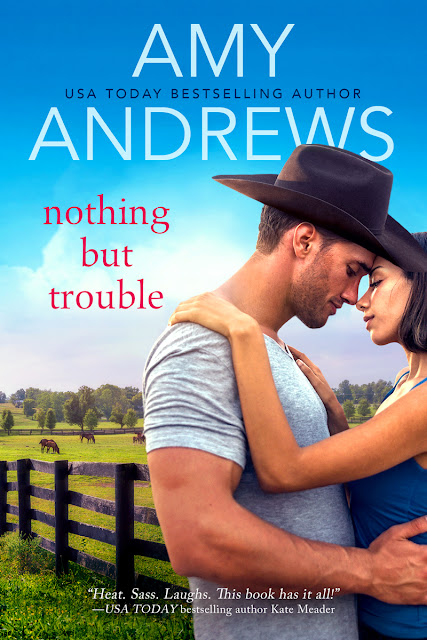 For five years, Cecilia Morgan’s entire existence has revolved around playing personal assistant to self-centered former NFL quarterback Wade Carter. But just when she finally gives her notice, his father’s health fails, and Wade whisks her back to his hometown. CC will stay for his dad—for now—even if that means ignoring how sexy her boss is starting to look in his Wranglers.

To say CC’s notice is a bombshell is an insult to bombs. Wade can’t imagine his life without his “left tackle.” She’s the only person who can tell him “no” and strangely, it’s his favorite quality. He’ll do anything to keep her from leaving, even if it means playing dirty and dragging her back to Credence, Colorado, with him.

But now they’re living under the same roof, getting involved in small-town politics, and bickering like an old married couple. Suddenly, five years of fighting is starting to feel a whole lot like foreplay. What’s a quarterback to do when he realizes he might be falling for his “left tackle”? Throw a Hail Mary she’ll never see coming, of course.


CC is walking home from a Credence street party after dancing with Wade and feeling stuff she should not be feeling especially after that very inconvenient sex dream she had about him! Wade catches up with her, scaring her half to death right into a hedge. Recovering from her ignomoy, he walks her home.  Then on the front porch a spider happens and thats when things really get interesting!


“Listen,” he said, as she coaxed the old lock which needed a bit of a jiggle and a certain tongue position before it would admit anyone. “Thanks for helping my mom with this whole thing.”

The lock gave and the door opened but CC wasn’t paying it any attention as she quirked an eyebrow at Wade. “I thought you were annoyed that I was spending all that time on your - let’s see if I can get this right - mother’s crazy ass scheme to pimp out strange women to the bachelors of Credence.”

He chuckled, unperturbed by having his words thrown back at him. “I may have been exaggerating for dramatic effect.”

CC’s eyebrow kicked up. “Ya think?”

CC shook her head. Wade’s ability to apologize had always been his redeeming grace. He was man enough to own his mistakes.

“Could I have that in writing?” she asked sweetly.

He grinned down at her, the deep grooves bracketing his mouth adding an extra layer of sexy and CC’s breath hitched. Just as suddenly, though, his smile faded and his gaze grew serious as it trekked slowly north and zeroed in on her bangs.

CC froze. “What? Why?” Adrenaline surged into her system as Wade’s hand slowly moved towards her hair. Keeping her head still she looked up trying to see what he was seeing even though part of her did not want to know.

“I think you collected a spider when you were parlaying with that hedge.”A wild surge of fear cramped through her diaphragm. Spider. Jesus, she hated spiders. “Don’t move.”

Despite wanting to jump up and down, shake her head and brush wildly at her hair like a mad woman, screaming, “Get it off, get if off,” she doubted she was capable of moving.


She turned her eyeballs upwards again suddenly seeing in her peripheral vision, what Wade was seeing. The creep of skinny legs traversing her bangs like the spider was already setting up house.

He chuckled as he stepped closer, his fingers at face level and descending slowly. Heat poured off his body but CC was oblivious to everything but the frantic beat of her pulse rushing like a waterfall through her ears.

“Nah. It’s only a baby. It’s quite cute actually.”

Cute? She glared at him. Or as much as she could with her head straight and her eyes practically rolled back in their sockets trying to monitor the progress of her unwanted arachnid visitor.

CC clamped her teeth together. “Get. It. Off. Me.”

He slid a hand onto her nape. Probably to stop her from taking matters into her own hands and doing the wild, hand-flapping, spider jig which every primal instinct she owned was urging her to do.

CC shut her eyes tight as he reached for the uninvited creature with his other hand, not wanting to watch as a live spider was plucked from her hair. The thought of having to touch it herself gave her the heebie jeebies and she was grateful Wade was volunteering.


Even if it was his fault she’d ended up in the damn hedge.

She felt a light brush against her forehead and squeezed her eyes even tighter, tensing everything so tight she doubted she’d have been able to squeeze a credit card between her butt cheeks. “Is it gone?”

Another chuckle, the warm fan of his breath on her face. “It’s gone.”

CC slowly opened her eyes and unclenched, Wade coming into hazy focus, looking at her with amusement sparking in his gaze.

“I didn’t know you were an arachnophobe.”

She’d already told him tonight he didn’t know everything about her, she wasn’t going there again. Besides, his closeness, his intense gaze, the way his thumb was stoking at her nape was more than enough to deal with at the moment.

Her heart was beating entirely differently now. He was so big. She was so used to seeing him, to being around him, she sometimes forgot how big he was. Hard to ignore the span of his chest from this close, though.

She should be moving away. She knew that. In fact, somewhere her wiser angels were telling her just that - screaming it at her, actually. But his stubble and the sexy indents around his mouth and the softness of his lips were dangerously fascinating.

Their gazes meshed for a beat or two and she couldn’t look away as his dropped, drifting to her mouth. As if he was going to kiss her. The stroking of his thumb halted and they just stared at each other. They stayed so still for so long, the sensor light went out, plunging them into darkness again. CC’s breath grew thick as the night surrounded them, her body throbbing with awareness and need.

And that was enough. In a blinding flash CC threw out caution and almost six years of professional boundaries, rose on her tip toes and kissed him.

He met her half way, their lips clashing in a frantic mash, opening wide, tasting and searching and demanding everything from the other. It was no tentative starter, no teaser, no slow and steady. It was on fire from the first touch of mouth on mouth and it was far sexier than anything he had done to her in her dream life.

He tasted better, his body against hers felt better, he smelled better and he sounded better, groaning deep in his throat. She felt that groan all the way to her toes and every hot spot in between. His spider catching hand, slid onto her hip, hitching her closer as the hand at her nape held her fast.

The movement must have tripped the sensor because the portico flooded with light again and it was like bolt of lightning had hit them, repelling them for each other, forcing them apart, forcing them two steps back.

CC gasped in horror. Holding her hands up in front of her she contemplated what the hell had just happened as her heart beat a wild tango in her chest. It was no consolation that Wade looked just as stunned.

What had she done? She’d kissed Wade. And he’d kissed her back. This was not good.

Wade recovered first, taking a step towards her. “CC –”

“No.” She shook her head taking a step back her hands up higher now almost level with her ears. Whatever he was going to say, she couldn’t deal with right now. Her cheeks were flushed and she was hot all over.

Sweet baby Jesus! He was her boss! And she wanted to die. “I’m so, so sorry...” CC desperately tried to come up with some justification for her actions to follow her apology. Like being in post-arachnid shock or temporary possession by the devil. But nothing – not even the clear and present need for exorcism - justified crossing the line she’d just crossed. The line that she had drawn all those years ago.

“It’s okay,” he said, his voice calm and placating, as if she was some kind of incendiary device primed to go off at any second.

CC shook her head vehemently. How could be so damn composed? How was kissing him ever okay? God...she just wanted to hit the erase button.

Yes. That was it. The erase button. Or the next best thing.

“Do you think,” she asked, locking her gaze with his, “it might be possible to never speak of this again?”

If they couldn’t erase it they could at least pretend it never happened, right?

“Sure.” He nodded, his voice still placatory. “Whatever you need.”

What she needed was a time machine but this would have to do. “Thank you.”

Then she turned on her heel, shoulder checking the door open as she hurried inside, her shaky legs carrying her up the stairs and into her bedroom where she burrowed under the covers and curled into a ball.

Sweet mother of pearl. What she done?

Okay so, I'm a huge arachnophobe! Are you spiders yes or spiders no? Let me know in the comments and you'll go into the draw to win a digtial copy of Nothing But Trouble! 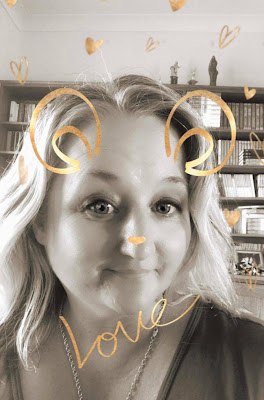