Today we have a smooch from Clare Connelly but first ..... the winner of last week's Sunday Smooch Giveaway is Mel! Just Mel, like Madonna, or Beyonce, but romance-reading and therefore way more awesome.

Mel, can you please email Amy Andrews (Amy@AmyAndrews.Com.Au) to receive your prize!

And now for today's Sunday Smooch from SHOCK HEIR FOR THE KING for Harlequin Presents. 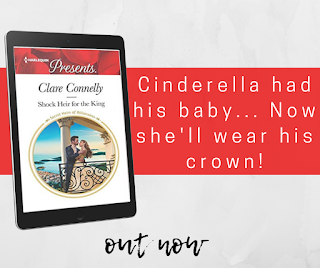 Cinderella had his baby…

Vibrant artist Frankie is shocked when Matt, the enigmatic stranger she gave her innocence to, reappears in her life. His touch was intensely sensual, his kiss pure magic…yet their affair had consequences, and Frankie had no way to contact him. Now she’s in for the biggest shock of all—Matt is actually King Matthias! And to claim his heir, he demands Frankie become his queen!

Explore the king’s Mediterranean palace with his royal bride

Scene set-up
I loved writing this book so much, for two reasons. I love, love, loved my hero, heroine and little prince to absolute bits, and also, I loved the country of Tolmirós, which features in the book. So much so I really wish I could escape there for a perfect summer holiday! This is a Cinderella-Secret Heir book. This scene picks up shortly after King Matthias has discovered he fathered a son - an heir! - two years earlier, and the only option, as he sees it, is marriage to the boy's mother. Only Frankie, a spirited artist from NYC has other ideas, despite the passion that flares between them...


‘Hang on.’ She lifted her hand, pressing it into the air between them as though it might put an end to this ridiculous conversation. ‘You can’t talk like it’s a foregone conclusion that I’ll marry you! You’ve suggested it and I’ve said, “Absolutely not”. You can’t just ride roughshod over me.’

His eyes narrowed almost imperceptibly. ‘Do you think not?’

‘Definitely not. Unless you think I’m not a sentient person, capable of making my own decisions?’

‘On the contrary. I think you are very capable of that—which is why I’ll expect you to make the right one. But be assured, Frankie, regardless of what you think and feel, I have no intention of leaving this country without my son. It is obviously better for everyone if you come with him as my fiancée.’

She sucked in a breath as the truth of what he was saying settled around her. ‘You’re actually threatening to take him away from me?’

Her eyes swept shut. ‘Telling me, more like.’ When she blinked her eyes open he was closer, so close her palm was almost touching his chest.

‘I’m asking you,’ he insisted, almost gentle, almost as though he understood her fear and wanted to ease it. ‘I’m asking you to see sense. I’m asking you not to put me in a position where I have to fight you for our child.’

Fear lanced her breast because she didn’t doubt the sincerity of his words, nor that he had the ability to follow through. She had some savings, but not a lot. Her adoptive parents were comfortable but by no means wealthy. Not in a million years would she be able to afford a lawyer of the calibre necessary to stave off this man’s determination. Would he even need a lawyer? Or would he have some kind of diplomatic privilege, given he was King?

‘You’re such a bastard,’ she said, stepping backwards. It was a mistake; the window was behind her. Ice-cold against her back, and rather like a vice clamping her to the spot.

‘I am the father to a two-year-old. A little boy I didn’t know about even three hours ago. Do you think wanting to raise him is truly unreasonable?’

‘I want this as little as you do, Frankie.’ He expelled a sigh and shook his head. ‘That is not completely true, in fact. I still want you. I came here tonight because I was thinking of our weekend together and I wished to take you to bed once more.’

She bit down on her tongue to stop a curse from flying from her lips. ‘How dare you?’ The words were numbed by shock. ‘After all these years? After the way you slept with me and then disappeared into thin air? You thought you could just turn up and have me fall at your feet?’

‘You did once before,’ he pointed out with insufferable arrogance.

Her fingertips itched with a violent impulse to slap him. ‘I didn’t know you then!’

‘And you don’t know me now,’ he continued, moving closer, speaking with a softness that was imbued with reasonable, rational intent. It was like a magic spell being cast. His proximity was enough to make her pulse thready and her cheeks glow pink.

But she hated him for the ease with which he could affect her and she did her best to hide any sign that she so much as noticed his proximity.

Another step closer and his fingertips lifted to press lightly against her cheek. His eyes held hers, like granite locking her to the window.

‘You think I don’t know you get what you want?’ she returned, pleased when the words came out cool and almost derisive. ‘You wanted me that weekend and look how that turned out.’

It was the wrong thing to say. Memories of their sensual, delicious time together punctuated the present, and she was falling into the past. With his body so close, so hard and broad, a random impulse to push onto her tiptoes and find his earlobe with her lips, to wobble it between her teeth before moving to his stubbled jaw and finally those wide, curving lips, made breathing almost impossible.

They were perfect lips, she thought distractedly, her artist’s mind working overtime as they studied the sculptured feature.

‘You are not seeing anyone else.’ It was a statement rather than a question, and his certainty was an insult.

‘Why do you say that?’ she asked, a little less steadily now.

There was something enigmatic and dangerous in his gaze, something that spoke of promises and need. Something that stilled her heart and warmed her skin. ‘You do not react to me like a woman who’s in love with another man.’

She sucked in a breath; it didn’t reach her lungs. ‘What’s that supposed to mean?’

His smile was sardonic. ‘You look at me with eyes that are hungry for what we shared. You tremble now because I am close to you.’ He dropped his fingertips to the pulse point at the base of her neck and she cursed her body’s traitorous reaction. ‘You do not wish to marry me, Frankie, but you want to be with me again, almost more than you want your next breath.’

Oh, God, it was true, but it was wrong! And there was a difference between animal instincts and intelligent consideration—there was no way she’d be stupid enough to fall prey to his virile, sensual pull. Not again. Only she was already falling, wasn’t she? Being drawn into his seductive, tantalising web…


Sorry, LoveCats, that's an ALMOST smooch, isn't it? ;) What I really love about this book, as I said, is the country of Tolmirós, which is sort of a combination of Italy, Greece and Spain. It's beautiful, ancient, sunlit, prosperous and happy, with (naturally) the most amazing food... If you could book a summer holiday anywhere in the world, where would it be and why? Leave a comment and I'll choose a winner to send a paperback book to! Come back next Sunday to find out who's won...

Shock Heir for the King is out now and available where all good romance books are sold.
Posted by Clare Connelly