Inspiration and Creativity with Annie West

As an author I get asked a lot about inspiration. Where do I get my story ideas? How do I ensure each one is unique? Do I really hear the voices of my characters in my head? Yes, sometimes, when I'm lucky!

We have a never-ending fascination with creative processes. Somehow, from something intangible, people manage to create the most amazing things. Like this (one of the famous Cluny tapestries): 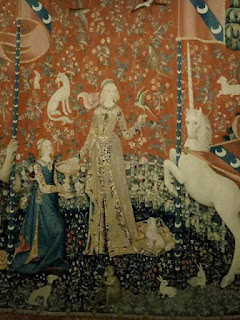 Before I started writing romances I thought I was one of the least creative people I knew. I did embroidery when I was younger, but usually following someone else's pattern. I thought that didn't really count as creative. But I adored the way scenes and patterns would emerge and create something that wasn't there before. Then there were the colours and textures which could make a piece particularly special.

What I've learned over the years is that we all have creative abilities, but in different areas. That we need to nurture our creativity for it to bloom rather than wither. We're not all going to be great artists but we have it within us to imagine something unique and to share that image/invention/recipe/story/idea with others.

That's where inspiration comes in. We need that spark of interest to get us started. But too often I think we succumb to that feeling of disappointment when our grand idea turns out to be not so grand. The result of our imaginings and hard work isn't quite as shiny and sparkling as we'd hoped. It's rare to get things just as you want the first time and maybe the thing you create will never be exactly as it was in your head. Maybe you'll never achieve quite that radiant perfection. But does it matter? If you get joy out of the inspiration to create, and maybe give others joy with it too, then the gap between the inspired idea and the slightly flawed creation doesn't matter so much.

I recently went to Sydney to see these beautiful tapestries which have survived since 1500. It was the second time I'd seen them but it was worth it because, being in the room surrounded by all six large, beautiful pieces, was a wonderful experience. Maybe not for everyone but I grew up loving history,  handicrafts, stories of medieval knights and damsels, and so on. I felt, not only fascination at how these were made but also a spark of inspiration - to take up a cross stitch I'd begun years ago, based on this very tapestry, and also to start writing a new story. 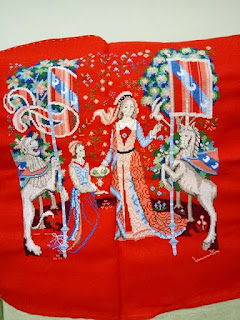 As you can see, my neglected cross stitch work bears only a rough resemblance to the original. The level of detail just isn't there. But the point is that I got pleasure out of doing it and, now that I've decided to start work on it again, I know it will bring me lots more enjoyment. Hopefully too there'll be others who enjoy it when it's done. It will never be nearly as impressive or glorious as the original but I don't care. Because I've learned to appreciate that the inspiration to create is a gift to be treasured. Not to be stifled because we're sure not to end up with something as good as the original idea.

It's the same with writing. Often the story in my head isn't the same as the story that ends up on my computer. Sometimes I feel my finished product isn't as good as the original story idea. But you know what? Sometimes it's better. I'd never have known that if I hadn't tried. And even if it's not exactly as I'd imagined, it's something that brings me joy and others enjoy reading. Plus the more I write the better writer I become.

What are you inspired by these days? Are you tempted to create as a result? I'd love to hear. 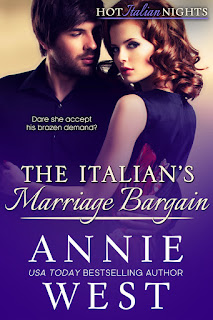 My latest creation is another Hot Italian Nights e-novella. It was inspired by a previous book in the series, where Gina, the red-headed movie star proves to be a sympathetic and intriguing character. I wanted to find out what happened to her and why she looked so glum at the mention of romance.

Enter Massimo Conti who turned out to be her secret husband! This is one story when the final product is very like the original idea for the story. Except I found myself so intrigued by the characters it was hard to keep this at novella length, and to leave them at the end. But that's a good thing, isn't it?
Posted by Annie West