When I was a teenager, I had a part-time job as a kitchen-hand to the most incredible Chef. She'd worked at The White House and an Executive Head Chef for chains of international hotels and I learned so much under her tutelage. She always used to stress the importance of Dessert - People always remember the dessert, she'd say in her thick German accent. It's the last chance you have to impress them!

There is wisdom in this, and not just with regards to culinary creations. We do place a disproportionate value on the last of anything. I do, anyway, and particularly my entertainment. The last chapter or the epilogue, are all-important. It doesn't matter how much I've loved a book, if the ending falls flat, I won't read it again. Same goes with shows.

There are a few shows that so completely nailed the Last Episode that no sooner have the credits started to roll than I go back to the first episode and start all over again. And so here I present a little listicle of my favourite ever last-shows/scenes.

The poignancy of the final season is an incredible achievement for a show that was delightfully funny throughout. Chandler and Monica's fertility issues, their adoption (hoorah! twins!), Ross and Rachel's reunion, Phoebe's wedding to Mike - finally, a man worthy of that kooky, unique character, and ultimately, Chandler and Monica's decision to move out of the city to start their family life in West Chester. I cry in most episodes of the last season, and all the way through the finale; it is such a fitting end-note to a show that rarely misses its mark.

Carrie and Big's relationship was the undercurrent for the whole show - I'm sure I felt every bit as conflicted as Carrie did when she was engaged to Aidan but knowing, deep down, in her heart of hearts, that he wasn't right for her. Seeing Carrie grapple with being in a relationship with Petrovsky, a man who didn't want children, forces her to confront her own maternal urgings. Speaking of which, there's Charlotte and Harry and their quest to adopt a baby, and that beautiful moment when they learn that they have a little one, finally, is so perfectly handled. Samantha, accepting she's in love with Smith, that she can still be strong and fierce and in love, all at once, and Miranda making peace with the fact that sometimes, a slow pace of life is okay. Oh, I love this show so very much, and the last episode is just perfect - and we viewers are, of course, given the relationship reunion we've all been waiting for! 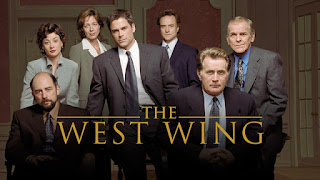 The more romance readers and writers I connect with online, the more I realise we almost all love THE WEST WING. It's not a romantic show, but it's a show about people and ideals, power and politics, and it is so full of authenticity and integrity that you can't help but love it. I must have watched it, in its entirety, at least fifteen times. I have an episode going almost every night.  And the last episode is perfection. We are filled with hope and optimism, and a weariness and nostalgia for the outgoing president, pride in what he's achieved. There's relationships tied up in big red bows, fitting farewells to lost loved ones, a return from Sam Seabourne (seriously, can I just say, Sam Seabourne is... yum...) though we still don't learn what the heck happened to Mandy!

I don't even know where to start with ER. It is one of those shows that I just love - every episode had such an emotional impact on me. The writing was so brilliant, never more so than in those early seasons with Ross & Green at the helm, though the writers did a great job of sustaining the impetus through a lot of changes. Dr Carter remained an enduring favourite of mine, I felt he was such a complex and endearing character, and I was really saddened that his life was in a pretty dark place in the final episode. With that being said, there was a mix of hope and realism that made everything about the episode poignant - and there's a steady stream of old-favourites, which is such a sign of respect to the viewers who invested so completely over the show over the years. I can't watch an ER ep without a box of tissues, and the last episode damned near breaks my heart (in a good way.)

I'm a sucker for all the Trek franchises (except for the abomination that is Discovery - Gene would be rolling over in his grave) and particularly for Voyager - ironic given that I initially hated it on the first viewing. By season three, Janeway had worked her way into my heart. I'm hooked now, and enjoying re-watching it with my nephews. I can't wait to share it with my kids when they're a bit older. If you're not familiar with the Trek world, the show starts with a ship being flung to the other side of the galaxy, so far that at maximum warp (the fastest speed a starship can travel at) it would take them 75 years to get home. They're not equipped for this kind of journey and they face potential anarchy and mutiny, so Janeway runs a tight ship, literally. The series follows the crew's exploits in the Delta quadrant. There are lots of incredible moments along the way, but all the while, we're wondering if they'll make it home. I'm not going to give it away, but suffice it to say, the final episodes have you on the edge of your seat before delivering a very satisfying wrap up.

Now, shows can shoot themselves in the foot, too, with bad endings, and there's one example that comes to mind immediately to demonstrate this: HOW I MET YOUR MOTHER. I binge watched this show with my husband, and we caught up just in time for the finale. Which was a disaster. An absolute disaster. And despite the fact the show had been one of my favourite viewing experiences, I haven't been game to go back and watch any of it again, just because the last episode was so disappointing.

Hit me with your favourite or most-hated last episode. Did you watch any of the above shows? Love them like I did? What have I missed?