Feathered and Furred, or Possibly Scaled! Those Other Neighbours

Parts of Australia have been suffering through an appalling heatwave. Not just the occasional day over 40 degrees C, but here, where I live, sustained heat through several days, reaching up around the 114F mark. Too hot!

It's been remarkable and horrible, with difficulty sleeping, catastrophic bushfire conditions, worries about elderly and ill friends who don't handle the heat well, and trouble for those who lost power. One of the other side effects was that we saw much more of our other neigbours - the ones who don't live in the neighbouring houses, but who live in the gardens and bush that surround us. In particular, we saw a lot more of the birds who usually live high in the trees when they came down looking for shade and water. The poor things were suffering with the heat and it was great hearing from other people how they made water available for their furred and winged neighbours too.

Here's one we rarely get a glimpse of. Usually it sleeps during the day and only comes out at night. It's a tawny frogmouth owl that spends its time, when not hunting, blending in with the tree trunks, trying to look like a stick. 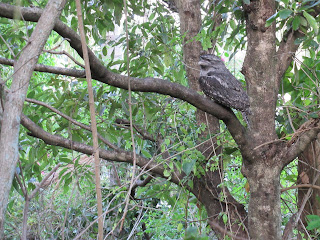 Here he is a little closer. He's got his eyes closed but when they're open they're large and orange! 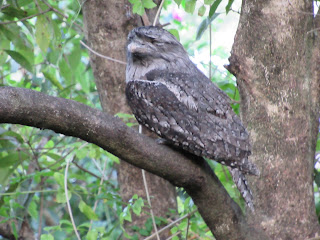 This fellow spent two afternoons on the fence by our pool, enjoying a patch of deep shade. Late in the day I turned the hose onto a gentle spray and he fluffed himself up to about 3 times his size then spread his wings at odd angles, catching the water and cooling himself off. Sadly I couldn't film him and shower him at the same time!

So, in the spirit of sharing, here are some photos of some other neighbours - taken near a relative's house. 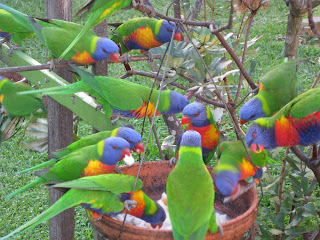 We get these noisy rainbow lorikeets at our home too, as well as eastern rosellas (which are thankfully much quieter), kookaburras, magpies, noisy mynas, currawongs and occasionally beautiful small falcons. We also get a couple of different types of possum and fruit bats who love our flowering plants and fight us for the pick of our vege garden! 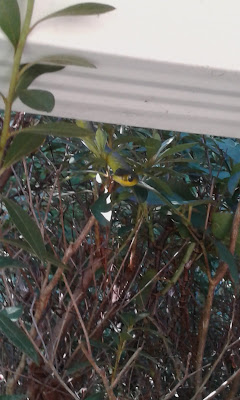 I'm not sure if you can make this one out. It's an inquisitive little green tree snake (harmless and not venomous) leaning down to peer beneath a verandah roof. Its head is in the centre of the photo and it's looking a little to your left. You can see its right eye. We don't get many tree snakes at my house but we've had red belly blacks as well as browns and small marsh snakes. Fortunately they don't seem to want to meet us almost as much as we don't want to meet them. We also have blue tongue lizards who like to bask in the late afternoon sun. They help keep the population of snails down.

Finally, what would a post about Aussie wildlife be without kangaroos. In this case, yes, kangaroos in a suburban street. Not mine but not that far away. This family group (dad, mum and junior) were alert but not too bothered by people. 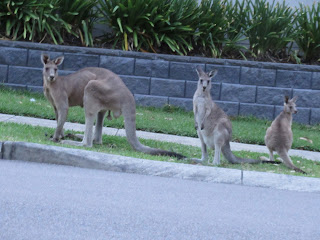 Email ThisBlogThis!Share to TwitterShare to FacebookShare to Pinterest
Labels: Annie West, Feathered and Furred - Those Other Neighbours, gardens, native animals