Today we have a smooch from Christy McKellen but first...


the winner of last week's Sunday Smooch Giveaway is Laurie!

Laurie, can you please contact Stefanie on stefanie (at) stefanie-london (dot) com to receive your copy of Mr Dangerously Sexy


And now for today's Sunday Smooch from The Unforgettable Spanish Tycoon 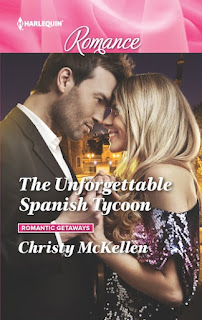 "I know we were more than just friends."
Once Elena Jones had shared an intense entanglement with striking Spaniard Caleb Araya, ending with both their hearts in tatters. Now she's a successful entrepreneur, and when he rejects a new business proposition, it's clear Caleb hasn't forgotten…

When an accident causes the tycoon to lose his memory, Caleb seems to think they are still a couple! Elena wants to help him recover…but will staying in Barcelona with him just put her heart in jeopardy again?

Hi LoveCats and thanks so much for having me here for another Sunday Smooch.

The following scene is from my latest release The Unforgettable Spanish Tycoon, which is a second chance at love and amnesia story.

Our heroine, Elena, has come to Barcelona looking for our hero Caleb’s help, but unfortunately the man has a long memory and, citing the acrimonious way they parted in the past, he’s crushed her hopes of a friendly reconciliation. Determined to change his mind, Elena has stuck around, only to witness him being involved in an accident that causes him to lose his memory. Realising she’s the only person available to take care of him she stays in Barcelona, hoping once his memory returns he’ll give her another chance. In the following scene she’s agreed to go as his pretend girlfriend to a crucial business meeting to help him disguise his memory loss in front of his potential clients. The trouble is, she’s finding it incredibly difficult to only pretend she’s attracted to him…

‘I know you Caleb; you’ll want to go in all guns blazing. I recommend a lighter touch. If he’s here with his wife he’s not going to take too kindly to being bullied and harangued.’

She put up a hand to pre-empt his angry rebuttal. ‘Not intentionally, I know, but you can come across as a little bit abrasive and intimidating until someone gets to know you. Show him a bit of your soft side too, that’s my advice.’

Caleb blinked at her, his brows drawn into a tight frown as he appeared to consider what she’d said. After a moment he nodded slowly, his frustrated expression clearing and being replaced with a wolfish grin. There was something else in his eyes too that made her tummy flip and her blood begin to race. She stared at his mouth, wondering erratically how she would react if he leant forwards and kissed her right now.

Shoving away her lustful urges, she nodded. ‘Good.’ She let out a gasp of surprise as he suddenly slipped his hand around her back and drew her closer to him.

‘Just relax, cariño. You seem tense and that’s going to look strange to our guests.’

Swallowing hard, she gave him a jerky nod, her heart banging hard against her chest and her nerves jangling due to their intimate proximity.

‘Perhaps I should practice my soft side on you before they get here,’ he murmured, his dark eyes boring into hers.

‘How are you going to do that?’ she asked, but before she could draw breath he leant in towards her and brushed his mouth against hers.

Fireworks seemed to go off deep inside her body and she wondered wildly for a second how the other diners would react if she suddenly burst into flames in front of them.

Caleb’s lips were warm and firm, his mouth fitting perfectly with hers. She stood frozen to the spot, too befuddled to react, as a crazy surge of desire unfolded deep inside her, spiralling out to the very ends of her fingers and toes.

His hands slid into her hair and instinctively she sank against him, her body craving the hard press of his against it.

A moment later she was left gasping for air when he drew away from her, giving her a strange knowing kind of smile and nodding towards the upper mezzanine, his arm pressing into her back as he encouraged her to mount the staircase with him.

‘Let’s go and find our seats, ready for the show,’ he murmured into her ear, his breath tickling the sensitive skin on her exposed neck and making her shiver with longing.

For a chance to win a paperback copy of The Unforgettable Spanish Tycoon, tell me the quality you value the most in a partner. (Mine is my husband’s enormous capacity for kindness to others.)

Come back next Sunday, when the winner of today's giveaway will be announced and a smooch from Ally Blake will be posted!