Today we have a smooch from Donna Alward but first...


And now for today's Sunday Smooch from The Cowboy's Convenient Bride 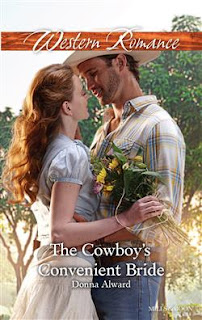 Laura Jessup is used to the rumors—everyone in tiny Gibson, Montana, thinks she’s a home-wrecker. And Laura can handle that if it means protecting her daughter from her sweet girl’s father. Only hunky EMT Tanner Hudson seems immune to the gossipmongers. The solution he proposes—a marriage in name only!—might just be crazy enough to work…if only Laura can keep her heart out of it.

Tanner wasn’t sure Laura would accept a platonic marriage, even though it would stop the rumor mills and get his own family off his back. But as the wedding draws closer, Tanner worries that his plan is working a little too well. He’s falling for Laura, hard. They thought they were ready for marriage, but are Tanner and Laura prepared for real love?


Scene set-up:   This month THE COWBOY’S CONVENIENT BRIDE is out in Australia! Yay! I loved writing this story. It’s a marriage of convenience trope, along with a rather secret baby – that is, the heroine, Laura, hasn’t told the father about his child. Because…well…the father is a dangerous man, and she’ll do whatever it takes to protect her child.

In this scene, when they first kiss, they’ve just visited their families to tell them about the upcoming wedding. It doesn’t go so well at Tanner’s folks’ place. She leaves there feeling a bit dirty; certainly not good enough for Tanner, and rather undesirable. She faces a lot of criticism with a stiff upper lip, but with Tanner, she finally lets her guard down. I’ll let Tanner take it from here:

“You’re not undesirable,” he said gently, pressing his lips against her hair. “I promise you, Laura. People see the mistakes, but they don’t see the wonderful things about you. Human nature is always that way, though it shouldn’t be.”

“Look at me,” she contradicted. “I’m a single mom who…well, I’m living in fear, aren’t I?” She pushed against his chest and peered up at him, and his heart ached at the sight of her red eyes and tear-streaked cheeks. “I’ve made so many mistakes, and now all I know how to do is run. Do you know how much I hate that about myself? That instead of standing up and fighting, I’m making decisions on how to hide better?”

He raised his hand and ran his thumb over her cheek. “You’re a mom. Moms do what they need to do to protect their children. No one can blame you for being mama bear.”

She shook her head. “Tanner, you’re wasting your time with me. Why tie yourself down for a year or two when you could be out looking for Miss Right? Someone far more suitable than me? Someone your family will approve of and welcome with open arms?” To his dismay, her tears welled again and she dropped her chin. “Someone worthy of the kind of man you are.”

“I don’t ever want to hear you say that again.” Tanner’s heart pounded painfully, hating how negative she was about herself. “You are not unworthy. You are definitely not undesirable, Laura. If you could see you the way I see you…”

She bit down on her lip.

He sighed, lifted her chin with his finger. “You are a tigress. I watched you bring that sweet baby girl into the world with a ferocity that was mind-blowing. You have endured the looks and the gossip for months in order to protect yourself and your baby, even though it cost you a lot personally. You are one of the strongest women I’ve ever met, and if people can’t see that, then that’s their problem.”

He knew he shouldn’t, but he ran his hand through her hair, the thick coppery strands slipping over his fingers like silk. She had a few pale freckles on her cheeks, just on either side of her nose, and they made her look young and artless. Her bottom lip was swollen and plump from where she’d bitten down on it. She was so damn beautiful.

“Tanner,” she whispered, her voice unsure. And it was that question that moved him forward, so close that their bodies brushed as his hand cradled her head and he kissed her.

He meant for it to be a kiss of reassurance, something gentle and affirming, to let her know that she was, indeed, desirable. He failed utterly, because the moment his mouth was on hers, there was nothing gentle or reassuring about it. Her breath caught deliciously as her lips opened beneath his, as instinctive as a flower turning toward the sun. His body felt super-charged and he pulled her closer, losing himself in the sweet taste of her. When she made a little sound in her throat, he nearly lost his mind. He threaded his other hand through her hair and tilted her head back, sliding his lips from hers and trailing them down the soft skin of her neck.

Have you ever been in a relationship where your significant other’s family didn’t approve?

Come back next Sunday, when the winner of today's giveaway will be announced and a smooch from Barb DeLeo's The Bouquet List will be posted!