Okay, confession time. I'm not really into Australian sports...I know, I know. I wrote an AFL hero for my first book. I had to actually research how AFL matches are started because I had no idea. FYI they bounce the ball in the center of the field. Who knew?

I just never got into footy...or cricket. Or either type of rugby. I like the tennis, but never felt compelled to do more than follow the results via updates from my husband.

But then we came to Canada and I discovered baseball. Turns out I didn't hate sport, I just hadn't found the right sport to watch.

Since then I've become an avid Blue Jays fan. They're the local team, here in Toronto, and when the whole city supports one team it's a very unifying experience. If you go to the Roger's stadium on game day it's a sea of blue.

Since baseball isn't too big down under, I thought I'd share some fun baseball facts in case you're not aware of what a fun game it is: 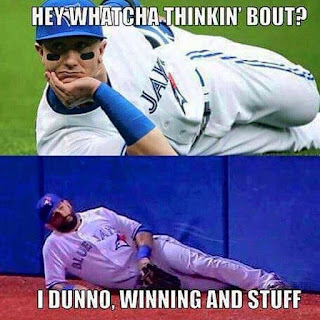 Have you ever watched or play baseball before? If not, whats your favourite sport?
Posted by Unknown