Today we have a smooch from The Bouquet List by Barbara DeLeo, but first ... the winner of last week's Sunday Smooch Giveaway is Diana Tidlund.

Diana, can you please contact Donna Alward - Donna (at) donnaalward(dot) com to receive your copy of The Cowboy's Convenient Bride 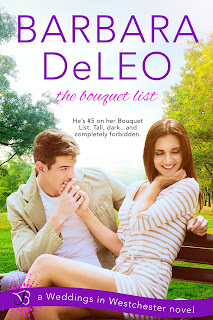 After a too-close call with death, Yasmin Katsalos is checking some things off her Bouquet List—things to do after you thought you were going to die. Fun fashion choices? Check. Purple hair and a cute diamond nose stud? Check, check. Now she's on to item #5: a flirty fling with a man who's tall, dark, rich...and totally out of her league.
And restaurateur Lane Griffiths definitely fits the bill.

Lane isn't just out of Yasmin's league. He's also her brother's best friend and therefore off-limits. Now that they're working together on renovations for her family's wedding hall, however, Yasmin has plenty of opportunities to bewitch, bother, and boldly seduce. He's reserved. She's relaxed. The only thing they share is a spark of attraction that's too strong to resist. But is Lane just another item on her bouquet list... or has Yasmin found something on her list that will last?

Lane and Yasmin are visiting a fabric warehouse to choose curtain fabric for the renovation of the restaurant. Yasmin has her sights firmly set on Lane fulfilling one of her dreams on her bouquet list while Lane has been fighting the urge to get closer to his best friends little sister.

For the next fifteen minutes, they walked through the maze of towering fabric bolts, stopping every time Yasmin saw something that took her fancy—a canary yellow and magenta stripe, a dizzying pattern of French botanicals with a blue background. At each one she’d stop and stroke it, turning puppy-dog eyes to Lane. Finally they came to an area surrounded by every shade of gold imaginable.

“Ohhhhhh.” That noise of pleasure at the back of her throat again. “Lane, this is beautiful,” she said and she picked up the corner of fabric. “Look how rich it is. It’s textured and a little bit shimmery.” She played with the weight of it in her hand. “And I think it would fall beautifully.” She lifted it to her face and breathed. “And it smells all fresh and linen-y.”

“Let’s hope that’s the closest it gets to anyone’s nose.” He stepped closer and rubbed a piece between his fingers. “Feels good. Let’s take a look at the price tag.”

Beside him, she stretched up on tiptoe as he brought the tag closer.“Thirty dollars per yard. Not too bad. I think we might have found what we’re looking for.”

“Oh my God, you’re a genius!” She reached an arm around his shoulders and when he turned back to look at her, they both froze.

He gazed down into her warm brown eyes and was sucker punched by the excitement and joy he found there. This was about so much more than fabric and decorating to her. This was about self-expression and wearing her heart on her sleeve, exactly the things that made him feel as though he was in unchartered territory. He was so logical and sensible and Yasmin was...not. But he didn’t care. In this instant he wanted to get as close to her as he could; he wanted some part of her zest for life and her crazy, naive excitement to brush off on him.

From somewhere in her handbag came the sound of her mindfulness bell. It was a call to the moment, a signal to forget about the past, to not worry about the future. Maybe it was even a call for him to let go of everything and lose himself in her.

Before he could decide, she pulled his head down to hers and kissed him. Her lips were cool and moist, her breathing rapid, and when she made that noise at the back of her throat again, he knew he couldn’t pull away. He backed her into the stack of fabric rolls opposite, all the while kissing her mouth.

A tide of sensations overpowered him. The clean, freshly laundered scent of the fabrics surrounding them, the sound of her body brushing up against the silk roll behind her, and the dazed look on her face when he finally pulled his lips from hers was priceless.

“Lane,” she whispered. “I don’t want you to get in trouble.” Her brown eyes were wide, her breathing rapid.

“I’m living in the moment,” he said and brushed his hand down the soft skin of her cheek. He didn’t want to talk or think, he just wanted to taste those dusky lips, so he leaned in and kissed her again. This time she hooked both hands around his neck and kissed him deeper, and a shudder ripped through his body. Cupping her face in his hands, he savored the sweet taste of her, wanting more—

“I do hope you realize that any damage to the fabrics
will be charged in full.” They sprang apart, and the shop assistant was looking at them disapprovingly over the top of her glasses. “Body oils can leave permanent stains on such fine material.” 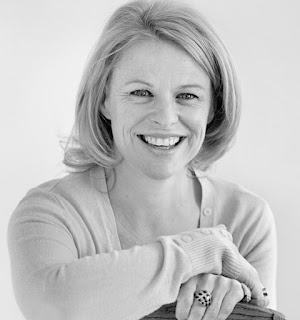 For a chance to win a copy of The Bouquet List, tell us what would be top of your "Bouquet List" - a list of things to do to celebrate being alive!

Come back next Sunday, when the winner of today's giveaway will be announced and a smooch from Tempted by Hollywood's Top Doc by Louisa George will be posted!