I'm so thrilled to have lovely Anna Campbell to visit to talk about her latest novella!

Hiya LoveCats! Lovely to be back here. Thank you. 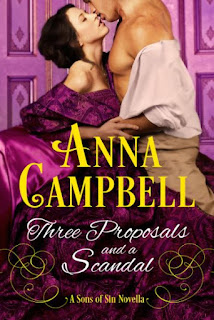 Isn’t that a classy way to start a blog? Except I’m not sure if I’m allowed to mention mice here on a love cats blog. It might (mice?) cause trouble.

Today I’d like to talk about my new Sons of Sin novella, THREE PROPOSALS AND A SCANDAL, and how it wasn’t part of my best-laid plans at all.

As many of you know, since 2011, I’ve been writing a series based around three men who were friends at Eton and who all suffered in various ways because of the scandals shadowing their births. 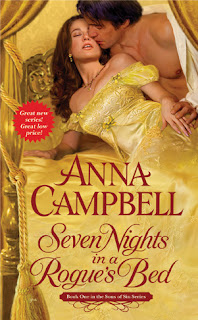 The Sons of Sin series started with a proposal for a stand-alone book, SEVEN NIGHTS IN A ROGUE’S BED, Jonas’s story (2012).

My editor at Grand Central Forever liked it so much, she wanted more in a similar vein. So my best-laid plan of writing another stand-alone historical romance (until then, I hadn’t attempted a series) became a trilogy. Cue A RAKE’S MIDNIGHT KISS (2013) and WHAT A DUKE DARES (2014). Oh, and a novella called DAYS OF RAKES AND ROSES (2013) which was a prequel.

You can already see those plans for a trilogy were going a bit wonky. 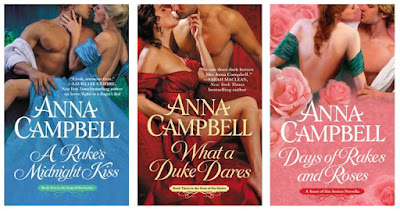 They went even wonkier when the trilogy turned into a quartet with the release this year of A SCOUNDREL BY MOONLIGHT, the Marquess of Leath’s story. 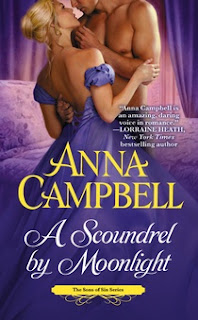 Leath wasn’t part of the original trio of sons of sin, but he was a dynamic character in WHAT A DUKE DARES and was screaming out for his own love story. By this stage, too, I was hooked on going back to see how my characters were managing. So when I had the chance to write another full-length book, I leaped at it like a cane toad after a blowfly.

But still, the series didn’t feel finished to me. In WHAT A DUKE DARES, Cam the hero is courting the perfect wife when he falls madly in love with Penelope Thorne, who is anything BUT the perfect wife. Which means Lady Marianne Seaton, Cam’s first choice, was left to keep a stiff upper lip through all the gossip about the duke jilting her. I felt then that she got the raw end of the prawn – after all, she’d done nothing wrong – and that feeling continued right through writing Scoundrel. So I decided that she needed her own happy ending.

And what do you know? I had a lovely hero just waiting in the wings for her. Odd how the subconscious works. Penelope’s brother Elias was another intriguing character and it turned out he was just right for Marianne.

So the story for THREE PROPOSALS AND A SCANDAL was born. The original plan of a trilogy had definitely gone a-gley. We’re now up to four full lengthers and two longish novellas. And I’ve got ideas for more stories set in this world that has such a grip on my imagination.

In 3 Proposals, Marianne faces a choice between three very different suitors – and on paper, Elias Thorne is the least eligible of all of them. Then everybody goes to the country, as happens! Marianne, her autocratic father, her suitors, plus a fair assortment of characters from the earlier SoS books converge on the year’s most glamorous house party. Dramatic events and revelations, not to mention forbidden passion, ensure that everything is sorted out in the wash.

Actually there is literally a wash – bad weather traps all the players in Jonas and Sidonie’s luxurious country house. In such close quarters, the characters can’t escape the consequences of their actions.

You could say Marianne’s best-laid plans gang a-gley too. Which is where the fun comes in!


Anna's got two downloads of THREE PROPOSALS AND A SCANDAL up for grabs today (international)!

Just tell her the last time your best-laid plans went awry – and whether the results were good or bad.

Whose hot kisses will melt the ice princess? All London is agog to know!

As the season reaches its brilliant climax, three very different men pursue beautiful Lady Marianne Seaton. She’s the marriage mart’s greatest prize – even if cruel and unjust gossip paints her as a woman cold and glittering as any diamond.

Lord Desborough is her father’s choice – rich, powerful, safe. Lord Tranter is society’s darling – handsome, dashing, charming.
Then there’s the dangerous, compelling man nobody in their right mind calls eligible. Elias Thorne, son of scandal, reputed deceiver, possessing a rakish fascination no woman can resist. A lady might choose Elias as a lover, but as a husband, he’s too risky a bet. Even if Marianne’s forbidden yearning for him threatens her future and her reputation.

When Marianne’s suitors pursue her to the year’s most glamorous house party, there will be proposals and passion, rivals and revelations, secrets and scandals.

Let battle commence – but will the best man win?

You can read an excerpt from THREE PROPOSALS AND A SCANDAL:  here 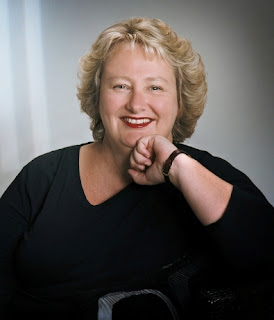 You can get your very own copy on:
Amazon
Smashwords