Today we have a smooch from  Sue MacKay but first


And now for today's Sunday Smooch from: From Duty to Daddy by Sue MacKay


Despite an unforgettable fling with beautiful Charlie Lang,

army medic Marshall Hunter's commitment to the forces
leaves no time for relationships. Two years on, he can't pass
up the opportunity to see her again...but the little girl playing
in the garden proves Charlie's moved on even if he hasn't.
Only Marshall's life is about to change for ever...


Charlie Lang has spent months trying to find US Army medic Marshall Hunter to tell him he's the father of her daughter, and suddenly he's turned up out of the blue and has learned the truth. What he doesn't know is why it is so important that he's a part of his daughter's life.

'Hey." A shadow fell across Charlie.

Her tummy squeezed with longing when she looked up into the eyes that had been a part of her dreams for so long. Hunger flared for that fun they'd shared, for the uncomplicated nights when they'd explored each other's bodies, the simple pleasure of walking hand in hand along the beach to watch the sunset. Even a need tugged at her for that professional camaraderie when Marshall had mentored the intern fresh from medical school. But none of that had a place in this situation. "Hey to you, too.'

'Sorry I charged off. I went down to the lake while everything sank in.' He looked genuinely contrite. 'I hope you didn't think I was running away.'

She winced, went for the truth. 'I hoped you hadn't, but I did wonder if you'd disappeared from my life again.' Even she heard the sadness in her voice. 'It must've been a huge shock.'
His forefinger traced her bottom lip. 'One I hadn't prepared for, that's for sure. But I'm back and you have my undivided attention for the next day or two.'
'I can go with that.' More than she'd expected, less than she'd hoped for. She stood before Marshall, studying him. Butterflies spread their wings in her stomach, fluttering wildly as she noted the well-honed muscles of his upper arms.

She'd missed him. Two weeks of wild passion and she'd spent the intervening years thinking and dreaming about him, wondering how he was, where he'd gone, who he might be with. And now he stood before her, looking superb in his casual attire.

Leaning forward, she stretched up onto her toes and reached for his mouth with hers. When her lips touched his all those long months of yearning disappeared in a haze of heat. It was as though they'd never gone their separate ways, as if the intervening time had been a figment of her imagination. Her hands slid around his neck, pulled him closer so she could deepen her kiss and press her tongue to his mouth to slide inside.

And then Marshall was hauling her up against his hard body, his hands splayed across her back as he held her to him. His lips claimed her mouth with a hunger that surprised and shocked her. Marshall had missed her, too. His tongue danced around hers. Her body melted into his, trying to become one with him.

She forgot everything except Marshall. His arms holding her, each one of his fingers pressing into her skin under her T-shirt like hot brands, his hard thighs that reached as high as her hips, that taut belly against her soft baby tummy. His hardening reaction to her.

"I'll take the beers outside to the veranda."
Her father's quiet voice pierced her euphoria, returned her to normal quicker than anything else could've. 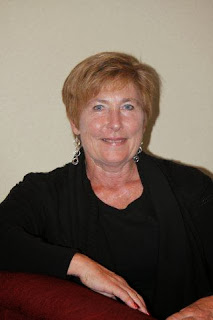 Marshall is a medic in the US Army. Does a man in uniform turn your head? Or do you go for the jeans and tee, or the business suit?

Come back next Sunday, when the winner of today's giveaway will be announced will be posted!