Today we have an excerpt  from Entangled Indulgence author  Hayson Manning, but first ...
the winner of last week's Sunday Smooch Giveaway is - - Marcy Shuler


And now for today's excerpt from "Winning the Boss's Heart", by Hayson Manning.

Mason Christian has twelve weeks to flip something old into something new, and then he's getting the hell out of Footsteps Bay - a tiny New Zealand coastal town. Not even his temporary secretary and personal assistant--the feisty, luscious Billie McLeod--will deter him, but there's no denying she makes him feel alive. More alive than he's felt in three years...
Billie has one dream: save enough money to finish her degree. That's why she's agreed to work for hard ass, all-business-no-pleasure Mason Christian--a man who has every intention of destroying through modernization the town's most cherished historical home. Before she can say 'see ya' she's signed on the dotted line and is contractually bound to be Mason's forty-second assistant. But working with male perfection every day is awesome with a capital A--as long as they can stick to a hands-off policy that gets harder every day... 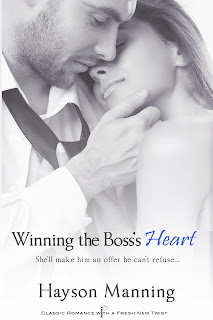 Excerpt from Winning the Boss’s Heart

Billie took another bite of the creamy frittata and mentally apologized to her hips. “I could live in this house, though, with my man. It’s close enough to town for you not to have to take a packed lunch for the journey and just far enough  that we could play naked Twister whenever we wanted and not worry about prying eyes.” She blinked repeatedly. Oh, God did I just say that?

The vibe in the room shifted. She looked down into her lap, her face flaming. Anywhere but at her boss. She could feel the burn of his stare.

“Right,” she whispered. “Sorry, brain and mouth weren’t communicating. Again.”  Her gaze came to rest on his, and she stilled at the hungry look he was not aiming at his food. His eyes dropped to her chest. Breath barely made it to her lungs. She refused to check whether if her clothes had disintegrated under his high-beam stare. It was as if she were sitting here in nothing more than her nail polish. Those weird shivers and tingles pulsed deep in her belly.

“What were you thinking just now?” His voice was dark and gravelly, leaving her sticky where she shouldn’t be.

She shoved back in her chair, clearing her mind of the image of her and her boss naked with both hands going for the same green circle on the Twister mat, but couldn’t stop her body doing a full flush. Shit. Had he noticed? Because he could never know. Would never  know. She would bank this bit of man magic to use at a later date, along with the drawer full of girl appliances that so far hadn’t cracked the code.

At the use of her nickname, she arrived back in the room with a thud. His eyebrows were raised. “What’s on your mind?”

She dabbed her mouth with her napkin to cover her lapse. “Well, Septimus, I was thinking about the periodic table and its positive benefits on mankind.”

For some reason he looked pissed off. Totally pissed off. “Funny, I didn’t take you to be the lying kind.” His eyes narrowed, and she had the distinct impression he’d just dismissed her.

Her spine straightened and her hands rested on the table. “You think I’m going to tell you everything that’s going on in my head at a given time?” She paused. “Actually, back that up. You think any woman is going to tell you what is going on in her mind whenever you please? There will be times she doesn’t want you to know what she’s thinking. Maybe she’d be thinking, ‘That guy standing over there, is one juicy specimen, and I’m mighty thirsty right now.’ There’s no way on this earth she’s ever going to tell Mr. Juicy she’s thirsty. She’d rather catch bubonic plague.”

His forkful of frittata halted halfway to his mouth. He put down the fork, sat back in his chair and regarded her.

She balled the napkin and placed it carefully on her plate “I thought you had a handle on women. You’ve probably dated a million of them.”

Peeved morphed into totally pissed off. His blue eyes turned stormier than a Pacific cyclone. “I do have a handle on women. I like to think I know women quite well. I’ve dated enough to write a manual with a glossary of terms and a table of contents.”

She returned his glare. “A glossary and a table of contents? Seriously, women actually date you?”
“I don’t date them, per se. I set out the terms at the beginning. No ties. It’s a mutually acceptable agreement. So yes, glossary.”

“Oh, so they’re takeaways? To be eaten later that night, but not memorable until you get the craving again.”

He scratched his head, a smile teasing his lips. “Interesting choice of words, but yes, pretty much. I’m their takeaway menu as well.” His gaze drilled holes through her. “How about you? Are you going to write a table of contents, there?”

The man should be used for interrogations. His stare was so intense she’d bet alien life-forms would give up the secrets to the universe.

She mashed her teeth against her bottom lip. She had to move this conversation to safer ground as there was no way she was going to admit to the one-line entry in her table of contents. Hell, it didn’t even classify as a table. More a footnote.  She straightened the knife and fork on her plate.

“I think that’s out of the boss-secretary range.” She went to stand.

“You didn’t answer the question?” The hard tone to his voice just plain annoyed her.

“Why are you pushing this?”

“I wanted to know what was going on in your head, and I thought you’d give me an honest answer, but...” A smile spread across his face. Slow to start, it curled his lips, continued upward and settled in his eyes. It was the first time she could remember him looking approachable, real, and open.

“What?” she asked, obviously missing his joke.

Her face flamed. If she put a piece of bread to her cheek right now she’d bet she could layer it with butter and preserves. 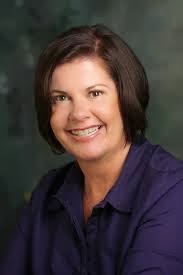 I have two e copies of "Winning the Boss's Heart".  To go in the draw I’d love to know if  you ever had an awkward moment with your boss?

Have you ever set the air-conditioning wrong so the meeting of the year turns into a tropical meltdown? Have you wiped a budget spreadsheet that your boss has been working on for a week and no you didn’t back it up? Ordered forty cartons of pink paper for the photocopier? I could go on and on…

Come back next Sunday, when the winner of today's giveaway will be announced -- and a smooch from "The Most Expensive Night of Her Life" by Amy Andrews will be posted!