Tennis, anyone? Yet another writerly distraction - by Annie West 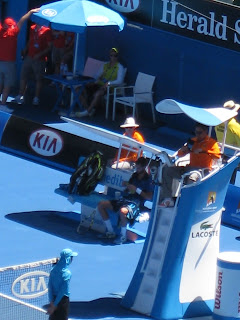 When the weather's warm and the skies are blue a romance writer's mind turns to romance, yes?

Well.... I confess that sometimes on a gorgeous day it's hard to stay focused at the computer when there are so many other things happening. I overheard a writer friend saying recently that she suffered from the temptation of starting a new project when she was part way through her current book because it had the allure of the 'ooh, bright, shiny and new'! Sometimes it's easier to do almost anything else than write a book. Even housekeeping has its allure (limited I grant you) when the alternative is to work on a turning point scene that just isn't going well. 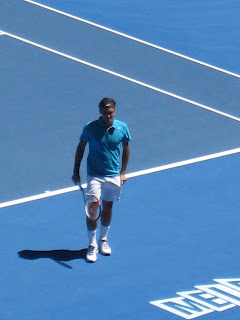 So, in recognition of all those times when distraction has got the better of me, I thought I'd share some photos I took last summer in Melbourne at the Australian Open Tennis. As distractions go, this one is a corker. Planted slap bang in the middle of summer, just after the Christmas mayhem when the temperatures soar and I'm ready for some time off and maybe a little afternoon doze, the temptation to watch other people hard at work is almost impossible to resist. And when one of the people working is Roger Federer, I think I can be excused for watching. That man makes tennis look far too easy. I'm not sure how he does it but then watching experts at work, making the ridiculously difficult look simple is always a pleasure. 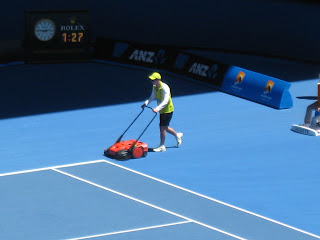 To my delight I found my day at the tennis full of unexpected surprises. Speaking of sitting down and watching others work - how about this? Between matches someone came out to mow the artificial turf!

We discussed this with fascination and eventually came to the conclusion the organisers hadn't gone barmy, but that the lawnmower is most likely a giant vacuum cleaner - designed to pick up those little bits of detritus that seem to bother tennis players.

To us it was pure amusement. And our smiles grew broader as we watched a second mower join the first. I wonder if we were the only members of the audience who found this sight rather odd? 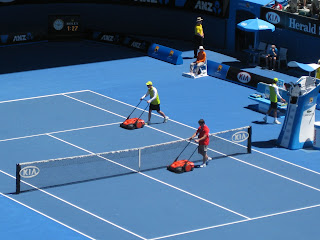 I know, we were there to watch the tennis, and we did - honestly! But attending a match isn't just about the play on court. It's about enjoying the other little bits and pieces. 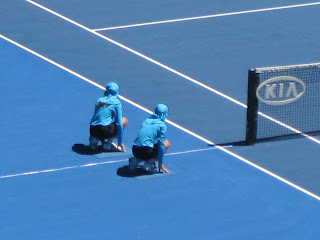 Like watching the ball girls and boys, who obviously have strict instructions on where the stand or crouch between points. They scurry about with such energy scooping up balls, displaying them with curious stiff-armed gestures for players' consideration and then abruptly kneeling at the side of the court, hands down and heads up, rather like attentive prairie dogs. 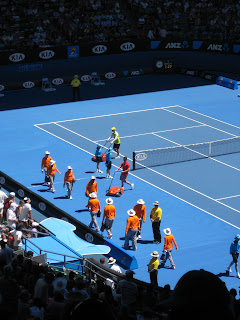 Then of course there's the arcane ritual of changing staff. They're colour-coded of course, and there seems to be a rigorously-adhered to way of moving on and off the court. It was almost like watching a changing of the guard outside Buckingham Palace except the staff had traded sun hats for braid and there wasn't a rifle in sight.

As a day of entertainment this was fantastic. The tennis was brilliant and so were all the other bits and pieces you don't usually get to see on TV because of the commercial breaks. Next summer I'll be hoping to manage another day at the tennis or at least an afternoon sprawled on the sofa, ignoring my manuscript while I watch from afar.

What's your favourite summer distraction?  Or given the seasons have moved on, your current guilty pleasure?
Posted by Annie West