Today we have a smooch from Winter Fusion by Anna Hackett, but first ...


Congratulations, Kaelee! Can you please contact Helen Lacey via the contact form on her website and she'll send you a copy of Marriage Under The Mistletoe.

And now for today's Sunday Smooch from Winter Fusion by Anna Hackett... 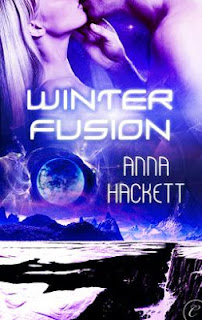 Ex-space marine Savan Bardan survived the Galactic Wars to become the most ruthless trade negotiator in the galaxy. His planet needs energy to survive, and he’ll do anything to close the deal for the Perman fusion crystals that can provide it—even if it means seducing his beautiful, infuriating opponent, a rival icier than her planet.

Perma’s top negotiator, Brinn Fjord, lost her father when Savan delayed her planet’s Trade Guild membership years ago. She hates the handsome Rendarian and the planet he represents. She’s determined to finish the deal and get rid of him as quickly as possible, so she can celebrate the holidays.

But soon the rival negotiators are in a fight for their lives. Besieged by mysterious accidents and unforgiving weather, Brinn and Savan have no one to depend on but each other. As they put the past aside, they uncover a desire hot enough to melt ice, and Brinn discovers a secret that may keep them apart.
28,000 words

Set-up: Rival intergalactic trade negotiators, Brinn Fjord and Savan Bardan have just been blindsided by a little girl during the Yule winter festival on the ice world of Perma.

“Now you must honor Fria,” the little girl pronounced, pointing above them.
Oh, no. With dread churning in her gut, Brinn looked up. Sure enough, a small bunch of mistel, with its green leaves and white berries, hung above them on a wooden arch.
“Who’s Fria?” Savan asked.
The girl bounced on her heels. “The wife of Odinn. Goddess of the frost but also goddess of love. Now you kiss.”
If things had been different, Brinn would have laughed at the surprise on Savan’s features. The girl’s excited face looked up at them expectantly.
Brinn waited for Savan to disappoint the girl, but when he gripped Brinn’s wrist, she gasped.
“The Code of Conduct says a negotiator must follow the customs of the world he’s visiting.” His hands slid up her arms.
“Bardan—”
He tugged her close to his body. “I wouldn’t want to insult your goddess.”
She felt small beside this man. Protected. Feminine. She pressed her gloved hands to his chest, trying to keep some distance between them. He was a merciless trader, and because of him she’d lost so much. He was a cold man with no feelings.
Except after watching him drink glogg, give an apology and humor a small girl, Brinn wasn’t so sure her first impression of him was correct.
He pulled her closer, until the scent of him filled her senses. Pure male. He smelled like warm skin and the sea breezes she’d smelled on the ocean planet, Duna. And under it a darker, intoxicating scent that was all Savan.
He tilted her head back. “One quick kiss. For tradition’s sake.”
This was nothing but business. He was just following the rules. Odinn, the man was tall. They were just keeping a little girl happy.
His head lowered, and in her mind, Brinn cursed herself as weak. Because despite everything, despite what she blamed this man for, she desperately wanted to feel his lips on hers.
***
Savan was shocked at the desire coursing through him. Desire for this icy Perman negotiator.
He rubbed a strand of her golden hair between his fingers. Hated that he was wearing gloves and couldn’t feel the silk of it.
She lifted her face and her cheeks were flushed, her blue eyes glowing.
The young girl and the Code of Conduct were just excuses. He wanted to taste this woman.
Before he could examine his motivations, he leaned down until their lips were a whisper apart. He smelled the spicy fragrance of wine on her lips. She sucked in a breath, her fingers gripping his suit.
Then he kissed her.
She was stiff at first, her body rigid against him, her mouth closed. But as he teased her lips, traced them with his tongue and slid an arm around her waist, she started to melt.
Her slim body leaned into the shelter of him, and he felt the press of slim curves and small, high breasts. Rendarian women were shorter, curvier, and Brinn’s long, lean contrast made her all the more alluring.
Desperate for her taste, he deepened the kiss. Her mouth opened and he swept his tongue inside. Then she gripped his arms and kissed him back.
Heat roared through Savan. Desire was a sharp ache that begged for more of her. Every day he contained himself, controlled his reactions at the trade table. The only time he let it loose was on the all-too-rare occasion he took a woman to bed.
Now he wanted Brinn Fjord naked beneath him, her long legs wrapped around his waist. He slid his hands under her heavy coat, anxious to feel her skin.
“Wow, Brinn, way to build Perman-Rendarian relations.”
The sharp female voice crashed through the haze of passion. It was followed by a child’s giggle.
Savan and Brinn jerked away from each other.
He was breathing heavily, and she swiped a hand across her mouth.
The action made his gut spasm. Like she wanted to wipe away the taste of him.
The little girl clapped her hands. “That’s the best kiss so far.” 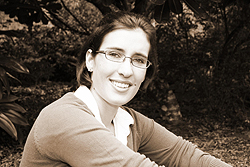 Winter Fusion is also available as part of the sci-fi romance holiday anthology from Carina Press, A GALACTIC HOLIDAY, with stories by Stacy Gail and Sasha Summers. Out December 3rd.


To be in the draw to win a download of Winter Fusion, just leave a comment and tell me, what’s your favourite sci-fi show, movie or book?


Come back next Sunday, when the winner of today's giveaway will be announced -- and a smooch from a Nikki Logan book will be posted!
Posted by Rachel Bailey