Four Legged Friends Of The Feline Variety . . . By Helen Lacey

It’s no secret that I am an animal lover . . . or nutcase as I have been called by my family over the years. I travelled a lot as a child and didn’t have the opportunity to have a pet of my own. My ‘pets’ were Lassie, Black Beauty, The Silver Brumby, My Friend Flicka and Buck from Call of The Wild. I loved these stories and the animal characters spoke to my eight year old imagination. When I was eleven, my parents stopped their travelling ways and we settled down so I could start high school.


It meant one thing to me. A dog. I could finally have a dog. And we did. Not the cute puppy I’d imagined though . . . a nine month old black Great Dane called Bruno who grew into an 85kg giant. And he was the start of my animal collection. I had always been pony mad, so a horse came next. And another dog. And another horse. And yet more dogs as some passed away and new ones came into my life. There was a duck called Doc and a cockatoo called Sam. Then came Nanoo – a goat. Which quickly turned into three goats when she unexpectedly had twins. It wasn't long before three turned into twelve (Goats don’t understand birth control, I discovered). 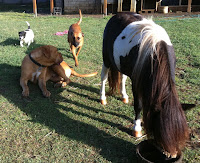 Fast forward many years and I married a man who has indulged my love for anything with four legs and a tail. Eight horses, three dogs, three birds and a house cow named Ginger would, you might think, be enough for even the most ardent animal enthusiast. Now, I have been parading as a LoveCat for a while . . . but the truth is we were a feline free family. I snuck under the radar here as someone without a cat. When other LoveCats would blog about their kitty’s I would shrink down the keyboard and hope it wasn't noticed that I was here under false pretences. But then along came Oscar. 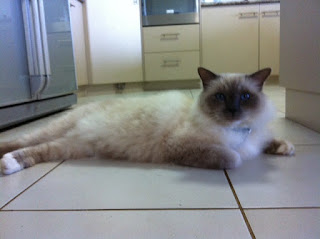 Three weeks ago Oscar needed a home, and I suddenly was the owner of the most amazing cat ever. Here he is, awake and clearly king of the world. His other usual pose is being asleep on the bed (terrible, I know). Now, the three dogs are not so convinced a cat is a great idea, particularly since he is inside, and they are outside. And my indoor parrot, Curly, doesn’t talk quite as much as he used to J

I’ve never been what you would call a ‘cat person’. Dogs and horses were my thing. I always considered cats aloof and disinterested in human interaction. But not now. My new Ragdoll has become a firm friend. He plays, he purrs, he loves attention. And he’s got me thinking about how some pets come into our lives and make a big impression, and how quickly they adapt to their new surroundings when they are happy and relaxed.


Do you think that some pets touch our heart more than others? Have you ever owned a pet you never imagined would fit in with your family, but somehow has? Or what about owning an unusual pet? And snake or alpaca lovers out there?

So, now there’s no more slinking down the keyboard. I . . . a horsey girl through and through . . . have a cat, and he already a legend.