Emily's memorial post last week about Diana Wynne Jones started me thinking. Perhaps because I'd not long returned from the Australian Romance Readers' conference, and thoughts about what I wanted from a book as a reader were crowding my thoughts. [Note the gratuitous photos from the conference - much fun was had in Bondi.] 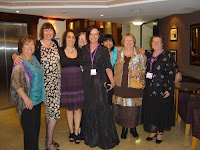 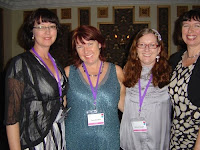 When I read about Diana Wynne Jones' death and how much Emily had loved her books, I though: Why didn't I know this author when she was alive? Because instinct tells me that I am going to love Diana Wynne Jones. And now I will never be able to write to her and tell her how much her books have meant to me.

Which in turn led me to wondering what still-living authors would I urge my friends to read so they can have the opportunity to write to said author if they wanted to?

This is SO not easy. But here's a couple I've come up with.

Kate Atkinson. Her books leave me breathless with awe, and have me on the edge of my seat most of the time. I'd suggest starting with her first book Behind the Scenes at the Museum. The story is told through the eyes of Ruby from the moment of her conception. Follow that up with the first of the Jackson Brodie detective novels Case Histories. Atkinson is one of those authors who is said to "transcend her genre," a phrase that sets my teeth on edge, but she truly is a fabulous author.

This is the back cover blurb from Case Histories:

Investigating other peoples tragedies and cock-ups and misfortunes was all he knew. He was used to being a voyeur, the outsider looking in, and nothing, but nothing, that anyone did surprised him anymore. Yet despite everything he'd seen and done, inside Jackson there remained a belief - a small, battered and bruised belief - that his job was to help people be good rather than punish them for being bad.

Cambridge is sweltering during an unusually hot summer. To Jackson Brodie, former police inspector turned private investigator, the world conists of one accounting sheet - Lost on the left, Found on the right - and the two never seem to balance.

Jackson has never felt at home in Cambridge, and has a failed marriage to prove it. Surrounded by death, intrigue and misfortune, his own life haunted by a family tragedy, he attempts to unravel three disparate case histories and begins to realise that in spite of apparent diversity, everything is connected...

I promise it's as good as it sounds

Next, this is a book rather than an author: Two Weeks With the Queen by Morris Gleitzman. This is a children's book and I've read a lot of other books by Gleitzman and enjoyed them all, but this is a stand out. It deals with some pretty grim issues - AIDs and childhood cancer - but it is side-splittingly funny. It will also make you cry. The main character, 12 year-old Colin Mudford, is a true hero and he will steal your heart. I so wish I'd written this book.

So what about you - who is the ONE author you would urge everyone to read? (I have a rather gleeful feeling that my tbr pile is going to grow rather drastically by the time we're finished here).