Today we have a smooch from Rebel With A Cause by Natalie Anderson, but first ...


Congratulations, Helen! Can you please contact Rachel Bailey at

and she'll send you a copy of Million-Dollar Amnesia Scandal.

And now for today's Sunday Smooch from Rebel With A Cause by Natalie Anderson... 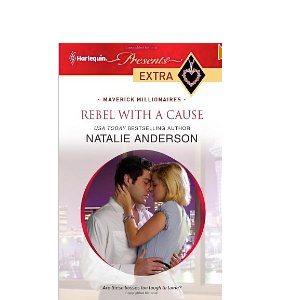 Office gossip...
It's well known that rugged tycoon Lorenzo Hall comes from the wrong side of the tracks, and that opposites attract... Apparently one glimpse of his pristine new assistant Sophy Braithwaite had Lorenzo itching to undress her - we wonder if she's as prim and proper as she looks! Of course, to Sophy, her smouldering boss should be off-limits, but it's easy to see how Lorenzo's criminally hot body and the dangerous twinkle in his eyes could tempt her to break all the rules...

Tired. That was her problem. Tired and frustrated and overwhelmed. And he wasn’t helping – towering over her like this, tormenting her all the time. She looked straight down to the floor as tears sprang at her eyes. “Forget it.”

“No,” he took her chin in firm fingers and tilted her head back up so he could see her face. A half-swallowed growl sounded. “You’re really upset.”

“My wounded pride will get over it,” she snapped, cross with her stupid weakness. “I don’t care what you think. I’m here to do a job. Now I’m going to get on with it.”

“Not until I apologise.”

“I didn’t think you’d be the type to say sorry.”

“And you think I’m the one making assumptions?” His eyes glinted but the smallest of smiles appeared. “Ok, I don’t say it often. But when I do, I mean it.” He stroked her jaw. “I’m sorry.”

“Its fine,” she shrugged, too crushed to accept it with good grace and determined not to let that smile have its usual disabling effect. “I don’t care what you think about me.”

His smiled deepened just a touch. Okay, so she was protesting too much.

She sighed as a flicker of good humour returned to her. “Don’t get big-headed about it. I care too much what everyone thinks about me.”

“What you think matters to me too.”

Okay, so now his niceness was making it worse. Embarrassed, she shifted. “Look, just forget it.”

“No,” his grip tightened. “I’m going to make it better. I’m going to do it anyway. It’s been on the cards for days. You know that.”

She froze, her body rendered immobile with anticipation overload. All she could do was gaze up at him – drowning in his eyes, yearning for that beautiful mouth to touch her.

And then it did.

A butterfly-light brush of lips on skin – a shade too close to her mouth to be a safe kiss on the cheek. And he lingered too long for it to be safe too.

“Better?” His question almost inaudible, but she heard it, felt it as his lips grazed her as he asked.

The smallest of pauses as they stood – intent hovering. Only a couple of inches separated their bodies, only a millimetre separated their lips. She could feel his heat, and smell his fresh soapy scent. A tremor ran through her as anticipation almost broke her nerve. Suddenly he moved – that merest fraction, the littlest drop to her mouth. His lips were warm, and they clung.

Her eyes closed, her body blanking everything so it could focus only on the touch. His gentleness so unexpected, the rush of sensation pierced through her.

A moan – was it her? The softness, the slowness, the sweetness overwhelmed her. She trembled again and his hands tightened. This wasn’t enough.

And then it was over.

She couldn’t breathe. She saw his eyes zooming in on her. Jet black now. Intense. Beautiful. Time and motion stopped for a moment that felt like infinity. Her every nerve was wired, waiting, wanting. Would he come back – would he kiss her again?

“No,” he said roughly, stepping back. His hands dropped – leaving her suddenly cold. “You were right. I was wrong.” He walked out the door. “I really am sorry.”

nzo gets to feel a whole lot sorrier as his relationship with Sophy grows all the more complicated… To be in the draw to win a signed copy of Rebel With A Cause, just leave a comment below!


Come back next Sunday, when the winner of today's giveaway will be announced -- and a smooch from Moon Thrall by Mel Teshco will be posted!
Posted by Emily May

Email ThisBlogThis!Share to TwitterShare to FacebookShare to Pinterest
Labels: Natalie Anderson, Rebel With A Cause, Sunday smooch