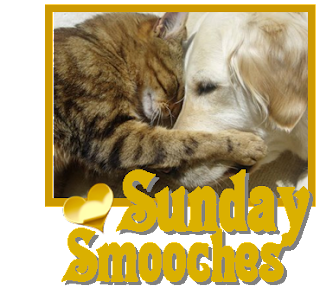 
Today we have a smooch from The Soldier's Untamed Heart by Nikki Logan, but first ...

the winner of last week's Sunday Smooch Giveaway is -- CATSLADY.


Congratulations, catslady! Can you please contact Emily May at

and she'll send you a signed copy of the Summer Blockbuster containing The Unmasking of a Lady.

And now for today's Sunday Smooch from The Soldier's Untamed Heart by Nikki Logan...

Brooding ex-soldier Clint McLeish isolates himself in the outback. He trusts no-one, but his wildlife park needs a security coordinator--someone as tough as him, as intuitive as him. Someone with luscious curves, eyes to drown in and an enticing tattoo peeking out from under her tank top...?

Romy Carvell is no man's fool! She can see there's something missing in rugged Clint's life, and if she can overcome her inhibitions, she may be the woman to finally tame his heart.

In The Soldier's Untamed Heart (out this month in bookstores as Harlequin Romance in North America and Mills & Boon Sweet in Australia/NZ) Romy Carvell has been working for a few weeks for brooding, ex-military Clint and avoiding him like the plague. She grew up with a military father and doesn't like 'the system'. But tonight is a work function and they've attended together. The more Romy avoids Clint the surlier he gets until she finds him tucked away in an alcove behind the building. She realises his aloof silence is not becuase he's so bad-ass, it's becuase he's so bad-with-crowds. Romy is about to leave him to his misery when his hands snake around her waist, steal her breath and he pulls her gently against him back into the sheltered alley alcove....
‘We never got to finish our dance,’ he said.

What had happened to the smart, savvy woman who raised a child, protected a family and sacrificed everything for her son? She fled completely in the face of the blatant desire pulsing from the over-sized testosterone bomb in front of her.

A surge of want answered deep in her body. The primal creature hungering for satisfaction. How bad could it be to give Cinderella one last dance with the Prince? Clint sensed her acquiescence and pulled her gently into his arms. She let herself lean into his solid frame, tucked in closer than she needed to be even in the close confines of the doorway, and pressed her cheek to his shoulder. He gathered her up against him. Their feet started moving in time with the distant music but it was automatic. Romy couldn't hear a thing over the march of his heart under her ear. It took only seconds for her own to fall into synch.

Her hands slipped around behind him, spread across his massive back, splayed and sure. He cocooned her until her face buried in the crook of his neck, comfortably, snugly. Like the safe harbour of her fantasies.

Nothing could harm her while she was in these arms.

They shuffled left and right, barely moving in the evening breeze. Seasons came and went, ages passed, continents drifted and still they pressed together, swaying.

It felt entirely natural to tilt her face and nuzzle the place below Clint's jaw. To breathe in the scent of him. To press her mouth into the heavy, thumping pulse there. To taste smooth, male skin for the first time. Her lips roamed his throat, her breasts lifting and falling against his chest, and she pushed onto her toes so she could reach his ear to take one perfect lobe softly between her teeth. It took an eternity.

The rumble in her ears sounded like thunder, but it came from deep inside Clint. The primitive growl excited the blood in her veins as his hands slid up to pull her harder against his straining body. She pulled one hand free and shoved it roughly through his hair, anchoring herself there and using it to hoist herself upwards so she could feast on the heady taste of him. She sank into his throat like a vampire starving for blood.

Her breasts strained against the bodice of her dress, almost coming entirely free as she stretched toward him. His hands found the bare, hot skin of her shoulders. The soft, sensitive flesh of her nape. The wild, flushed heat of her cheeks. They braced her jaw, tore her away from her decadent feeding and tilted her gaze upwards. She had just enough seconds to suck in a breath before those magnificent, sinful lips dropped decisively onto hers.

The Soldier's Untamed Heart is out this month in bookstores North America and Australia/NZ. Nikki has one copy to give away to a lucky commenter! No specific question, just let Nikki know whether this is a kiss you'd like to see moreof. *fans self*

Come back next Sunday, when the winner of today's giveaway will be announced -- and a smooch from Death's Sweet Embrace by Tracey O'Hara will be posted!
Posted by Emily May