Today we have a smooch from Walk On The Wild Side by Natalie Anderson, but first ...


Congratulations, Kylie! Can you please contact Tracey O'Hara at

and she'll send you a copy of Death's Sweet Embrace.

And now for today's Sunday Smooch from Walk On The Wild Side by Natalie Anderson...

There’s nothing like a kiss! As in real life, kisses in stories often herald the turning point in a relationship – sometimes they’ve been waiting so long to happen it’s such a relief, sometimes they’re playful and passionate and fun and sometimes, they’re a result of a pent-up mess of emotions – anger, frustration and desire… 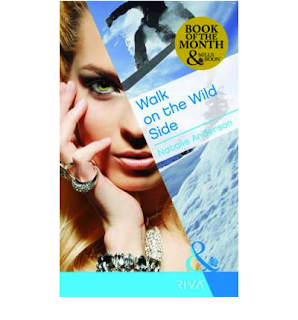 fternoon on the beach...
A fling with sinfully hot champion snowboarder Jack Greene isn't Kelsi Reid's normal behaviour... but one glimpse of his wicked blue eyes has Kelsi throwing caution to the deep blue sea (along with her clothes!). After all, who better to go crazy with than a man who deserves a gold medal for his prowess on the slopes and in the bedroom...? Then Kelsi crashes down with a terrifying bump - of the baby kind. They couldn't be worse matched - Jack is Mr Right-Now, while Kelsi craves stability. But it's hard to keep your feet on the ground once you've met the man who turns your world upside down...

“Oh?” He stopped. She still had her back pressed against the window, as far away from him as possible.

“Sure,” she nodded. “I have a good job. I have no worries financially. It won’t be easy, but it’ll be doable.”

Somehow that didn’t make him feel any better. Now she was suggesting she didn’t even want his money? Ridiculous. Doing it alone wasn’t easy – even with only one child. His instincts sharpened – body becoming even more battle ready. “What will you do with the baby?”

“When it comes I can keep working from home. Later I can return to the office part-time and work my hours back up as it gets older.”

“You’ve thought all this through,” he said, not keeping the sarcasm out.

She looked cool. “Funnily enough, I haven’t been able to think of much else.”

Okay so he knew it was the twenty-first century and all and there were plenty of working mothers out there, plenty of solo mothers too, but there was that basic instinct in him now rearing its head up from the cave it had been born in, saying the man ought to provide for his woman and child. And there was another instinct rising too, threatening to override everything – his need for this woman – pushing him to do the thing he’d been dreaming of for ever. “And where did you see me fitting in with this?”

“Pardon?” Jack couldn’t control the snap of his muscles.

“I already said you don’t need to worry about it.” Kelsi looked away from the wild expression in his eyes. “I can manage just fine on my own.” And she could. And she would.

“Really.” He looked furious. “Ok, let’s say, for a second, that that’s true.” He walked towards her, his anger surging ahead of him in an invisible cloud. “Let’s say you can manage just fine on your own and you don’t need me.”

Kelsi froze, despite her instinct screaming at her to run. And then it was too late. He swiftly pulled her into his arms – lifting her right off her feet. Her heart thundered at the feel of his hard strength pressed so close to her. And it almost beat right out of her chest as his mouth descended.

Her whole body convulsed as his lips pressed hard on hers. It was anger she tasted, but also passion. And she couldn’t do anything except put her arms around his neck and hold on. She tried so hard to stop the spinning inside but she couldn’t contain the response, couldn’t stop herself softening, opening for him and feeling the rush of desire for more. He was all strength, all passion. And all fury.

She shuddered deeply again as he ravaged, showing her no mercy, kissing her until she succumbed completely – not just to his desire, but to her own. Until suddenly she kissed him back as keenly and as wildly. Until just as suddenly she panicked and pushed him away hard.

He dropped her and she gasped.

“What do we do about that?” he demanded.

Kelsi quickly took three paces away, her emotions tossed about like corks on a stormy sea. What was he thinking kissing her like that? “You think complicating this even more is a good idea?” she demanded shakily.

“It’s that complicated already, I don’t think this is going to make much difference.”

“You’ve got to be kidding.”

w what happens next? Just leave a comment to be in the draw for a signed copy of Walk on the Wild Side!

Come back next Sunday, when the winner of today's giveaway will be announced -- and a smooch from Million-Dollar Amnesia Scandal by Rachel Bailey will be posted!
Posted by Emily May

Email ThisBlogThis!Share to TwitterShare to FacebookShare to Pinterest
Labels: Natalie Anderson, Sunday smooch, Walk on the Wild Side