If I had his time again…
by Nikki Logan 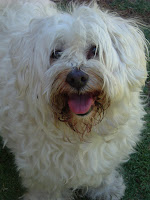 
Last week I lost my writing companion, friend and muse, Larry. Also known as Mister Larry, Larry-the-lounge-lizard, Little Larry, Lazarus, Mister Loo Loo and Laryngitis depending on my (and his) mood. He didn’t care what he was called as long as someone was calling him. The centre-of-attention was his favourite place to be. Larry was in my life for fifteen fabulous years after he was dumped as a puppy by his first family because his legs were a bit wonky. I figure I gave him fourteen-and-a-half extra years he wouldn’t have had and I truly believe they were good ones.
But time (and congestive heart failure) caught up with Larry on a beautiful sunny West Australian day and we had to make the difficult humane decision. Fortunately my sister is an emergency vet and runs a private business where she delivers beautiful, gentle euthenasia for pets in their homes. It meant we could do it in his favourite shady patch on the lawn surrounded by his people and his two best friends in the world, our cat and other dog.
Still a terrible moment in any family.
So I sit here in my quiet, quiet office in our quiet, quiet house and realise how much I took Larry’s presence for granted. He was—more than I realised—my constant shadow. The click-click of his claws on our timber floors became part of the normal sound of our household. His gregarious (often grumpy) personality affected, inspired and entertained us all. It will take me some time to sit on the sofa with my feet on the ground rather than tucked up next to me to avoid stepping on a Larry-tail, to put out one dinner bowl instead of two, to not frown at the silence at the front door on getting home, not to check under the table before sliding the chair out. These are where the daily reminders of his life lie.
If I had his time again I’d make some changes. I’d give him all the things he secretly thought were wrong with the way we do things. There’s something in Larry’s Rulz for all of us.
THE RULZ according to Larry
1. Walks will be longer
2. Baths will be shorter
3. Dogs will go commando. No tethers, tags or chokers.
4. The pack stays together. Two-legged members will need to re-arrange their working commitments.
5. Food will be fresh. Preferably moving.
6. Dogs under 10kg are in management. Dogs over 10kg are in shipping.
7. The Cat eats second
8. The pack will sleep together the big bed will be acceptable
9. Gardens will be a minimum of five acres
10. Death, when it comes, will be swift and glorious. Preferably in a fight-to-the-death with a polar bear.
Farewell Little Larry and safe journey home.
Posted by Nikki Logan