Today we have a smooch from Clare Connelly but first......the winner of last week's Sunday Smooch Giveaway is .... Laurie!


And now for today's Sunday Smooch from REGRET ME NOT! 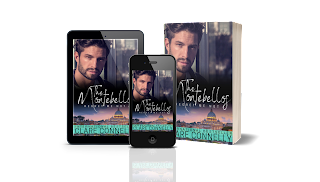 One sexy night with consequences...

It was one single night of passion with a mysterious stranger, but when Elodie Gardiner realises she’s pregnant, she naturally intends to tell her billionaire lover – only before she can do so, she discovers a very pressing reason to keep their baby a secret!


Three years later, ruthless tycoon Fiero Montebello receives a shocking call from a London hospital. The woman he slept with three years ago is in a serious condition in ICU – and the son he never knew he had is in the crèche!


Family is everything to Fiero and there’s no way he’s going to let his son be raised anywhere than under his roof – even if that means his one-time lover is a part of that. He can never forgive her for keeping their child a secret, but that doesn’t mean he doesn’t still want her. This seduction is a dangerous game laced with resentment and hurt…

This is a secret love-child romance (one of my favourite tropes) and the baby daddy in question, Italian Billionaire Fiero Montebello is, understandably, furious to discover he has a two year old he never knew about. The result of a passionate one-night-stand, this scene is the immediate aftermath of his discovery and shows how he's processing the news and trying to work out how to fit all the pieces together. I absolutely love this book but I'd have to say Fiero's fiery nature (see what I did there?) has made him my most polarising hero to date! He's a big tough alpha but don't worry, he's got a heart of gold in there and you do get to see it by the end of the book ;)  I'm giving away an e-book copy of the book (sorry, it's only in digital because NYC with fellow love-cats Amy Andrews and Michelle Douglas has meant no time for boring things like checking the formatting of print files, WHOOPS!).

“I made a mistake.”
“Christo, si, you made a mistake. And now you’re asking me to forgive and forget.”
She swept her eyes shut, knowing what a monumental task that would be for him. “For Jack.”
“Yes, for Jack.” He ground his teeth together, and she was conscious, out of nowhere, of how close they were to one another. His long fingers were curled around her wrists, and every time he sucked in a breath his chest moved forward to brush against her nipples.
The last thing she’d expected to feel for this man ever again, and especially in that moment, was desire, but there it was, turning her blood to lava and her knees to jelly.
Something in the air around them shifted, changing so that she was conscious of him in a way that was all-consuming and definitely not one-sided. She saw the way his eyes changed, his pupils flexing, his lids lowering; she saw his lips part and felt his warm breath fan her temples and her own lips mirrored his, separating and pushing a soft breath from her lungs.
“You should have told me about him.” And despite the anger he’d thrown at her, the fury, the threats, her stomach looped because she felt what was at the root of everything he’d said and done: devastation.
He was devastated.
She sobbed, but he lifted a finger to her lips, and she gasped in surprise, the touch totally unexpected.
“Stop crying.”
She shook her head a little. “I can’t.”
His hands cupped her face then, holding her completely still, and her hands, now free, dropped to her side. “I will never forgive you for keeping my son away from me.”
His words were like acid and his touch was like silk. She couldn’t fathom how she felt.
“But it appears I cannot make the same decision you did. I will not push you out of his life.” Her heart turned over in her chest.
His thumb padded over her lower lip and her heart rabbited against her ribs for another reason now. Despite the seriousness of this conversation, she could barely concentrate.
“You and Jack will move into my house.” The words were devoid of emotion. “For six months, you will live with me, to see if we can do it your way – and raise him together.”
It was more than she’d expected. Different to what she’d hoped and yet it made a strange kind of sense. “We’ll live together?”
His eyes flashed. “For Jack’s sake, yes, but you and I will remember the truth, Elodie. We will know what we think and feel, no matter how much effort we go to for the happiness of our son.”
His head dropped a little lower, his eyes scanning hers. “You will know that when I smile, it means nothing. That my anger and hatred for your decisions are still inside of me, weighing down on me with the pressure of every single day of Jack’s life I have missed.”
Salty tears clogged her eyes.
“You will know, when we look at Jack and laugh, like normal parents, that it’s a lie.”
Her lips parted on a gasp, or perhaps the start of a plea, a desire to make him stop talking like this. “And you will know that if I kiss you, Elodie, it is because of the same chemistry that drove us together that night, and nothing more. You will know that I will never like you as a person, that I will never forgive you for your decisions.”
She didn’t get a chance to speak. His lips claimed hers and she moaned, knees that had been jelly for long, aching minutes giving way so she would have collapsed to the ground if it weren’t for his arm clamped vice-like around her back, holding her to his body, binding them together.
And they were bound together. By their son, and by something else, something that lodged inside Elodie and refused to let go.
“Don't.” She shook her head but didn’t pull back. She didn’t want to.
Her brain was screaming at her to put some distance between them but her body…oh, her traitorous, treacherous body. Everything shook and trembled inside of her, and her hands were lifting and tangling in his hair of their own accord. She remembered this so well – the feeling of her body pressed to his. The height difference meant she had to push right up to be able to reach, but his hands curved around her waist and lifted her the rest of the way, holding her to him, her feet off the floor, as though it was the only way they could exist.
His words were still hammering inside of her, the disdain he felt for her evident in every single one, but her body was desperate, hungry, and for a moment, she willingly pushed away common sense and simply existed. She felt rather than thought.
His kiss dominated her.
It was only afterwards that she realised it was a punishing kiss, designed to draw submission from her, to show her his pain, even when it was a pain she already understood. But punishing or not, the kiss swirled the waters of her soul so she was whimpering into his mouth before she realised it, and only just stopped herself from moaning, ‘please’, into the room.
Her intense need was a wake up call.
With a fierce burst of reason, she pushed at his chest, separating them now, her feet finding the floor physically and metaphorically, shock at what had just happened causing her to lift trembling fingers to her lips as though she could wipe his kiss away.
It was some very small consolation that he looked as shocked as she felt.
“Don’t,” she said again, but this time, she meant it. “Don’t you dare kiss me.”

F0r a chance to win a digital copy of REGRET ME NOT leave a comment below. Bonus points, tell me if you love alpha heroes or not? They're 100% my jam, I love them. Michelle Reid wrote some of my all-time favourites, but pretty much any Harlequin Presents hero floats my boat. What about you?! Alpha or Beta or Cinnamon Roll!? 'Til next time, LoveCats, meowy mwahs. x
Posted by Clare Connelly