If you follow my author page on Facebook then you’d have seen ALL the pictures I posted of my recent jaunt to Singapore and New York, and have heard some of the silly stories I told of our travels.

Like the time the New York Subway played a practical joke on Mr Douglas and me—it let him on, but not me. He stood on the train while I stood on the platform, and we waved forlornly to each other as the train pulled out. [We caught up with each other 15 mins later so don’t feel bad for me. It was, actually, hilarious.]

But I thought I’d share another “funny” story today.


For our first week in New York we stayed in a hotel called The Stewart. It’s across the road from Madison Square Gardens—so…pretty central. ;-) We had a view onto 31st Street and a very sweet little church, but also a view onto the building behind us. I took a peek out of this back window not long after we arrived, and the rooms in this neighbouring building were dark, with no movement, but there were figures in beds. I thought: Oh, it’s a nursing home. How deserted it looks…and lonely.


In the wee small hours of the night—when it felt like it should’ve been day…and I was really hungry because it should’ve been day (there’s a 12 hour time difference between Singapore and New York, so the good news is you don’t have to change the time on your watch), I couldn’t help thinking about those lonely figures in those dark little rooms.

When we finally allowed ourselves to play wake ups in the morning, I said to Mr Douglas, “Do you know we’re overlooking a scene of human misery?” I told him about the scene that would greet him from our back window. I wondered aloud if we could go visit because…you know, we’re on holiday and had the time etc.

Of course, he then had to go and peek out the window too (I’m the window peeker in our relationship, him not so much). And he started to laugh! 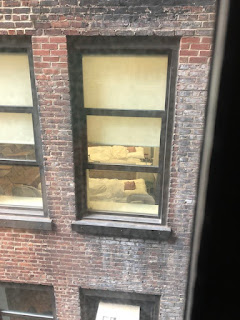 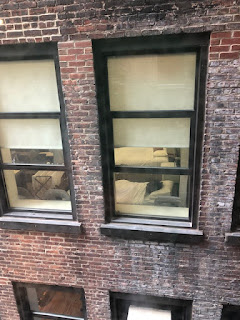 Dear reader, he’s not a callous man. But I was shocked, I tell you—shocked! Until he revealed all. They weren’t incapacitated people in lonely beds in dark rooms but mannequins. We were looking into a medical training facility! 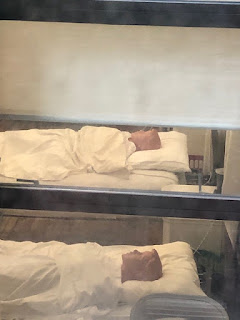 There's probably a moral to that story, but I have no idea what it is. ;-)


But if you do ever find yourself in New York I highly recommend the Brooklyn Lager--it was very refreshing after a day spent trudging through a city in 37C temps. 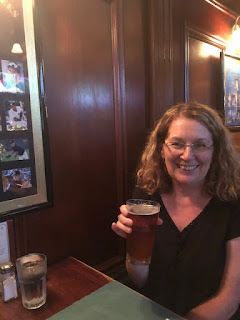