Today we have a retro smooch from Michelle Douglas to celebrate her new The Best Of... anthology, but first...

... the winners (there were 5!) of last week's Sunday Smooch Giveaway were Jessica Lawson, laurie, Laney4, kimeleon and Jan Vanengen!

Can you please contact Clare: clare (at) clareconnelly (dot) co (dot) uk to receive your copy of Burn Me Once.

And now for today's Sunday Smooch from The Redemption of Rico D'Angelo. 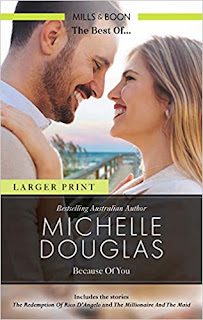 
Rico stared at her, his jaw slack. Then a light blazed in his eyes. It stole her breath. Before she could gather her wits he reached across, took her face in his hands and kissed her.

This scene is set in a cafe (after all, Neen and Rico are in the process of setting up their own charity cafe). Do you have a favourite place to sneak out for coffee and cake? What's your very favourite thing about your local cafe?

Email ThisBlogThis!Share to TwitterShare to FacebookShare to Pinterest
Labels: Because of You, michelle douglas, Mills & Boon The Best of..., Sunday smooch, The Redemption of Rico D'Angelo