Today we have a smooch from The Prince's Cinderella but first...

Donamae, can you please contact Kandy: kandy (at) kandyshepherd (dot) com to receive your copy of Second Chance with the Single Dad

And now for today's Sunday Smooch from Andrea Bolter. 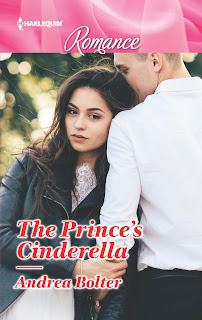 From event planner…To belle of the ball!

Organizing a charity gala on the glamorous French Riviera is a dream come true for event planner Marie. And then she realizes she’ll be working with single dad--and handsome prince--Zander! Marie has never felt she truly belonged anywhere, least of all alongside royalty, but Zander soon sweeps her into his world of toddlers and tiaras! Dare Marie believe she’s found her fairy-tale ending--a family of her own?

Scene set-up: In Cannes on the French Riviera, Marie and Zander attend glamorous parties together as they work on a charity gala of their own.


Zander hadn’t meant to kiss Marie. Hadn’t meant to at all!
Why had he, why had he? His brain throbbed, and would until it had its answer. Maybe it was after being approached by those two aggressive party girls. Who reminded him of Henriette and the endless parade of awful women that had defined his life thus far. Marie was so definitely not like any of them. And he found himself opening up to her, perhaps actually too much.
But, in any case, a kiss on the cheek was merely a sociable gesture, right? He hoped that was it, although he wouldn’t swear to that conclusion.
Unfortunately, his mouth wouldn’t stop vibrating after the feel of his lips against Marie’s cheek. Surely the clouds in the sky weren’t as soft as her delicate skin. His mouth had barely brushed across her face but his body reacted as if a firecracker had exploded inside of him.
His behavior was dangerous. It was shocking how he hadn’t had any control of himself in the moment after he’d confided in her about the royal gold diggers. His mouth was propelled to Marie’s face as if an outside power had deemed it and there was nothing he could do but obey the command.
Everyone pecked everyone on the cheek at events like this, he reasoned with himself. It was no big deal. Marie had probably forgotten about a minute after it happened. He would, too.
As those reassurances ticked across his mind, he knew they were lies. The kiss dilated his eyes with desire, both physical and emotional. It was as if he hadn’t known how hungry he was until someone handed him a crust of bread. He suddenly felt as if he was starving.
However, this was no time in his life to sate that craving.
He could surely have physical contact with a woman if he wanted to. After the APCF gala. And with a female other than Marie. He was free to have dalliances that meant nothing to him, and not under the same room as Abella of course. But there’d be no getting serious with anyone for many years to come, if ever.
Indeed, after Henriette, it had been dawning on him more and more that if he were ever to marry, his wife would effectively become Abella’s mother. Not only would he have to find someone he could trust with his niece’s safety and wellbeing, whoever he was with would have to be able and willing to accept Abella as part of the package. To be a good influence on her and to genuinely love her like her own. Zander would accept nothing less. It was a tall order.
Frankly, he doubted he’d ever meet someone like that. Which was fine with him. Abella was the one in line for the throne. As Zander was Elise’s younger brother, he was not obliged to produce heirs. If he never married it might appear unconventional but wouldn’t harm the royal family in any way.
So why was it that everything about Marie had thrown him into a brainstorm of new ideas and new contradictions?

Zander and Marie are in charge of a huge charity gala. If you had loads of money to spend and resources at your disposal, would you enjoy throwing a lavish party? What aspect would be the most fun to you?


Come back next Sunday, when the winner of today's giveaway will be announced and a smooch from Clare Connelly will be posted!