Why Mr Thornton is the archetypal alpha (and therefore one of my favourite heroes ever!).

It's Clare Connelly here, and for those who follow me on social media (@ClareWritesLove), you'll know that I'm a bit (just a tiny bit) obsessed with North & South. I love the book, but the BBC adaptation is the stuff of historical dreams. And Mr Thornton is a particularly fine character.

He's also, to my mind, an example of a perfect alpha hero.  And here's why...

1. He's rough around the edges.

One of the first scenes with Mr Thornton shows him in a full-on fist fight. When he catches a worker smoking at his mill, he bashes the man up, but we learn it is out of a desire to protect his staff. Three hundred bodies were laid out on a hill, many of them children, after a mill fire. He banned smoking to make sure it doesn't happen at his factory.

His father lost everything in a 'speculation' and went on to commit suicide. Mr Thornton took a job and saved up - everything he has in life he has because of his own hard work.

When his father died and he became 'man of the house', he cared most about putting a roof over his mother and sister's heads. He is duty bound - when Margaret Hale embraces him to protect him from the angry mob of rioters, he proposes. Because he loves her, first and foremost, but also, to protect her honour.

I mean, really, really great in a suit. 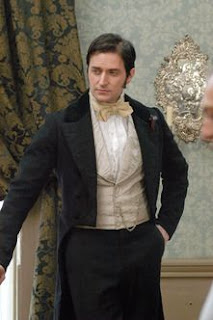 He's had a mill fan operating for years. Less fluff on the lungs of his workers. He forgives and listens to Nicholas Higgins when many masters wouldn't.

6. He has deep feelings, even though he keeps them hidden.

When he sees Margaret embracing a mystery man (her brother, as it turns out) you see every single hurt and betrayal in his face. After he's proposed to her and she's turned him down, you feel his deep pain and hurt, but he keeps it all hidden behind a very, very sexy and controlled demeanour (le sigh). And the scene where the mill is in deep financial trouble and he says, "You mustn't mind losing the house, mother." Oh, it hurts!

When Mr Thornton speaks, people listen. No matter what room he's in, he commands attention with ease and dignity.

8. He is bent on self-improvement.

Not content with having achieved financial security, he is reading the classics under the tutelage of Mr Hale. An active, enquiring mind is a definite alpha trait!

Beneath the hard exterior and the toughness that defines him, he is a man ruled by honour, decency, kindness and fairness. To borrow a line from another historical favourite of mine, "One has all the goodness and the other all the appearance of it." It's easy to like a hero wrapped up in soft smiles and eagerness-to-please, but a Mr Thornton is a diamond in the rough... and totally swoon worthy.


And, just for fun, the ending...because all alphas eventually meet their match and this match is one I'll never tire of watching.

Okay, your turn. Who's your favourite hero and why? Are you weak at the knees for Mr Thornton, or is Mr Bingley more your historical cup of tea?