Today we have a smooch from Cat-in-the-wild Leah Ashton but first...


... the winner of last week's Sunday Smooch Giveaway is WrensRoost!


Can you please contact Ally: ally (at) allyblake (dot) com  to receive your copy of The Wedding Wish.


And now for today's Sunday Smooch from Leah's latest release: Behind the Billionaire's Guarded Heart. 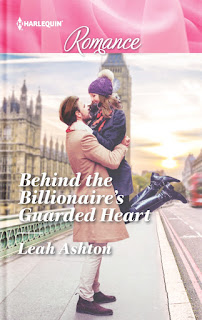 Falling for her mysterious boss…

When Australian heiress April Molyneux is left brokenhearted, she looks for a new start in London. Determined to stand on her own two feet, she finds herself working for the reclusive yet sexy billionaire Hugh Bennell.

Hugh likes his life—and his emotions—uncomplicated, but meeting glamorous April changes everything. Hugh doesn’t do relationships, and April wants to keep the independence she’s worked so hard for. But with these sparks flying…resistance might be futile!

Once a socialite and Instastar, April has dyed her hair and is using the name April Spencer, so Hugh - her boss - has no idea of her fortune or her glamorous past. Hugh's mother was a hoarder, and April's job is to clean out her house which has been left untouched since her death. Hugh has been having a hard time dealing with his mother's hoard, and what it represents to him, but slowly he's been revealing more to April and beginning to trust her. Hugh has just revealed some of his past to April, when he suddenly turns the tables..


‘My husband left me,’ she said.
Silence.
She’d expected him to recoil. Because surely this wasn’t the conversation Hugh Bennell wanted to have with her?
Instead, he nodded. ‘Are you okay?’ he asked simply.
She smiled. Genuinely this time. ‘Yes,’ she said with confidence. ‘Now. Sucked for a bit, though.’
He smiled too.
‘I needed a change. So here I am. Unpacking your boxes and stacking supermarket shelves. Trust me, it’s not as glamorous a mid-life crisis as I’d expected.’
‘What happened?’ he asked. Gently.
‘We fell out of love,’ she said. ‘Him first, but me too. I just hadn’t realised it. So I’m okay. Not heartbroken or anything. But it was still sad.’
‘Not heartbroken?’ he prompted.
Her gaze had travelled downwards, along his jaw and chin. Now it flew upwards, locking with his.
‘What do you think?’ she asked.
Her gaze was heated. Hot. Deliberately so.
Nope. Definitely not scared any more.
‘No,’ he said, his voice deliciously low. ‘I don’t think you are.’
And just like that weeks of tension, of attraction, of connection were just—there. No glancing away, no changing the subject, no pretending it didn’t exist.
It was there. Unequivocally.
Oh, God.
His eyes were dark, and intensely focused on her. He’d moved closer again, so that only centimetres separated them, and there was no question about what he wanted to do next.
He leant closer. Close enough that his breath was hot against her cheek and then her ear.
‘I want to kiss you,’ he said, and the low rawness of his voice made her shiver.
How did he know? April thought. That she needed that? That she needed a moment? That despite the crackling tension between them doubts still tugged at her?
Could she trust her instincts after what had happened to her marriage? She’d got it all so very wrong. And, even more than that, could she actually kiss another man?
It had been so long—so very, very long…
‘Kiss me,’ she said, because she couldn’t wait another moment.
Although it turned out she had to.
His lips were at her ear, and he didn’t move them far. Instead he pressed his mouth to the sensitive skin of her neck, at the edge of her jaw. Suddenly her knees were like jelly, but strong hands at her waist steadied her.
The sensation of his lips against her neck and his hands against her body was so good, and April’s eyes slid shut as a sigh escaped from her mouth.
Her fingers untangled themselves from the sleeves of her jumper and reached for Hugh blindly, hitting the solid wall of his stomach and sliding up and around to the breadth of his back.
Hugh dotted her jaw with kisses that were firm but soft. And glorious. But not even close to enough. More than almost anything, she wanted to turn her head to meet his mouth with hers—but she didn’t. Because, even more than she wanted that, she wanted this anticipation to last for ever. This promise of Hugh’s kiss that, she realised, had been growing from the moment they’d met.
But he was definitely going to kiss her now – this mysterious man who was so different to anyone she’d ever met - and the wonder of that she wanted to hold onto. Just a few seconds longer.
By the time his mouth reached hers April felt about as solid as air. His hands pressed her closer, and then her own hands drew his chest against her breasts.
His mouth was hot against hers, and confident.
If she’d been tentative, or if her brain had been capable of worrying about her kissing technique or other such nonsense, his assuredness would have erased it all.
But, as it was, April didn’t feel at all unsure. In fact, Hugh made her feel that this kiss was about as right as anything could get. 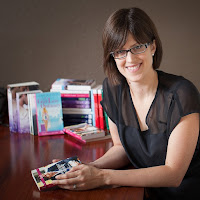 April is working two jobs - cleaning out a hoard, and stacking supermarket shelves. What's the worst job you've ever had?