Today we have a smooch from Amy Andrews but first ....... the winner of last week's Sunday Smooch Giveaway is  Helen Sibbritt!

Helen can you please contact bronwynjameson (at) gmail (dot) come to receive your prize!

And now for today's Sunday Smooch from Playing the Player........ 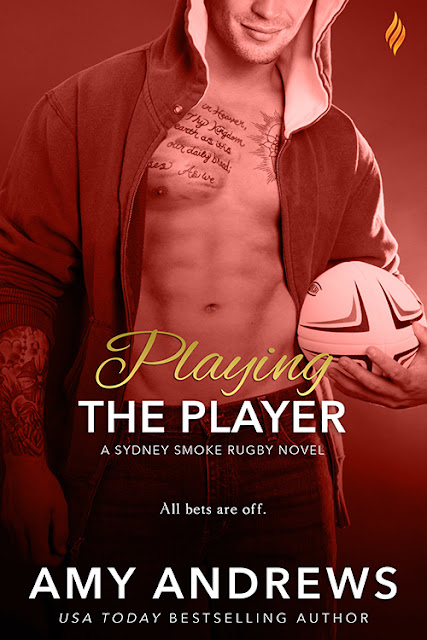 After a long history with crappy guys, high school teacher Em Newman is going man-vegan. Four months of revirginization has opened her eyes to her doormat imitation but, baby’s got spine now, and some smooth-talking—even if he is sinfully hot—rugby player, won’t be adding her as a notch anytime soon.

Lincoln Quinn loves rugby, women, and poker. And he likes to win at all three. When his team mates bet him he can’t break through Em’s resolve, he’s more than up for the challenge. But this lady has a shoebox of stipulations before she’ll even go on a date with him, much less use that mouth for kissing instead of giving orders.

Something’s gotta give but this time Em’s not settling. And Linc’s questioning everything he ever knew about matters of the heart.


Em and Linc have just been to the wedding of Dex and Harper. They didn't go together but she's a little tipsy on booze and migraine pills and he's offered her a lift home. During their drive they've discussed why nothing is going to happen between them because Em is done with players and because Linc doesn't take advantage of inebriated women. After a couple of attempts to get out of his low, low car in her high, high stillettos, he's removed them for her so she doesn't break her neck and decided he'd better walk her to her front door as well.


“Come on.” He reached for her elbow again. “I’ll walk you to your door.”
She didn’t argue this time. She figured his car was probably difficult enough to get out of sober, so she allowed him to help her out and guide her down the path. She didn’t notice the cold cement beneath her bare feet, conscious as she was of his hand on her bare arm, of the brush of his sleeve against her shoulder, and the occasional bump of their hips.
She was glad the distance was short because her resolve to go inside alone was weakening by the second. Ever since he’d mentioned kissing she could think of little else.
Oh, that’s right, she was the one who’d mentioned kissing.
Em turned as she mounted the one step that formed a small alcove to her recessed front door. He stayed on the path, but he was well within touching distance. The overhead light shone directly on his head, spilling golden rays over his blond hair and making the snowy white of his expensive shirt glow. The open collar and the dangling tails of his bow tie added a whole extra dollop of sexy.
He was simply dazzling, and Em’s pulse fluttered madly at the sight of him.
Green. His eyes were a pale green.
“Thank you for the lift. And for the hand out of your ridiculously low car and your assistance to my door. And for not making a move on me.”
“It was my pleasure. Or, you know”—he grinned and shoved his hands in his pockets—“not, as the case may be.”
Em grinned back, momentarily awed by the way his face moved in perfect combination to create such utter masculine beauty. It was hard to believe it was regularly driven into the dirt in the name of sport. She half expected to see a little fake sparkle shining from one of his front teeth like a toothpaste commercial.
Standing here smiling at each other like idiots under her front porch light, Em thought maybe they could actually be friends. She’d never had a guy friend, due to the whole desperately seeking daddy thing that had been occupying her psyche for far too long. It could be kinda cool, and Harper would like it. But then his gaze dropped to her breasts. And lingered.
Nope. Definitely not friends.
“You should go in. You’re cold.”
He could have been referring to the goose bumps on her arms, but he wasn’t staring at her arms. He was staring at her fripples, twin headlights beaming at him, the tight points almost painful against the fabric of her bra. Those green eyes widened at the sight, the small dark blobs of his pupils dilating slightly. She might still be a little tipsy, but she knew lust when she saw it.
And just like that, she was back to wanting him.
Friends? She could never be friends with Lincoln Quinn. She was always going to want to tear his clothes off.
Damned if that didn’t send a frenzy of signals to all her good places. A flood of heat erupted from her pelvis and flashed like wildfire through her system. Her heart beat drummed through her head and throbbed between her legs—the perfect duff duff beat for her vagina party.
Em couldn’t ever remember wanting a man like this.
“Oh, screw it,” she muttered to herself, dropping her clutch, phone,  shoes, and wrap in a messy, noisy heap as she took a step forward, rose on her tiptoes, slid her arms around his neck, and pressed her mouth to his.
She didn’t know what to expect. There hadn’t been a plan, like so often when she kissed a guy.
Hell, she wasn’t thinking logically.
She just...wanted. Desired. Needed. Like a drink of water for a parched throat. Or a blast of oxygen to deprived lungs.
But Lincoln seemed to know what to do, opening to her straight away on a groan that vibrated through her belly, his hands sliding around her waist and pulling her closer.
He tasted like wedding cake and every bad thing she’d been denying herself. She had four months of pent up lust vibrating inside her, and she was giving it all to him.
Suddenly, though, he was tearing his mouth away, shaking his head. “Okay, wait,” he panted, pressing his forehead to hers. “Wait.”
Em sucked air in and out of her lungs, confusion muddying her thoughts. Her heart hammered against her ribs like it was trying to get out.
Wait?
“We really shouldn’t be doing this,” he whispered, his voice low and throaty, the light green of his eyes practically swallowed up by the dilation of his pupils.
He was right. They shouldn’t be. They should stop. If they didn’t, she was going to hate herself in the morning for her lack of control.
“I know,” she said huskily, trying to clear her head, trying to resist temptation, but failing as her hips moved restlessly against him. “I know,” she repeated.
But maybe, just for now, they could... 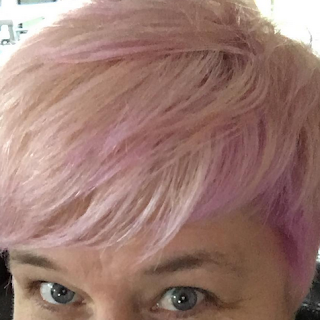 For a chance to *win a digital copy of Playing the Player (must have an Amazon account) leave an answer to the following question in the comments and yes, it may make us all blush a little so fair warning....

I think this is the first book - and I've written 60+!! - where I've actually used the anatomically correct name for the errr.....lady parts. I almost didn't. And then I thought - why not? Half of the world has one and it fitted perfectly into the scene.  But do "real" words drag you out of a book? Lets face it, they're not pretty words, right so is it an ewwwww moment? Would you rather read soft euphemisms or just have genitalia (another unpretty word) mentioned through implication rather than direct language?


*The winner will be gifted a copy after the Jan 30th release date!