I love looking back on the previous year and remembering the books that brought me so much pleasure. So in the interests of sharing, these are my favourite books for 2016…

Category Romance
I had two favourite category romances. They’re both from the Romance / Cherish / Forever line, but they’re also very different in tone and theme. The first I read in January: Jessica Gilmore’s PROPOSAL AT THE WINTER BALL (fabulous friends to lovers story). The second I read in July: Marion Lennox’s HIS CINDERELLA HEIRESS (and as the title says, it’s a perfect Cinderella story). Such utterly wonderful and heartfelt stories!

Oh, and gosh darn it! I want to also honourably mention Scarlet Wilson’s HIS LOST AND FOUND BRIDE, and Nikki Logan’s STRANDED WITH HER RESCUER. Both of these were seriously emotional reads.

Historical
I discovered Ashley Gardner’s CAPTAIN LACEY REGENCY MYSTERY SERIES last year, and I gobbled it up. It’s not just that the last time I was in London (in 2014) that I stayed in Drury Lane, and Captain Lacey lives just off Drury Lane, but the world Gardner creates and the community that forms around her eponymous hero is complicated, compelling and captivating.

And for sheer and utter delight factor, Connie Brockway’s BRIDAL FAVOURS. I bought this because of a review I read…and I thought it was a contemporary romance rather than a historical. And I was disappointed when I found out it was historical…until I started reading. ;-)

Favourite Non-Romance Book
Neil Gaiman’s THE OCEAN AT THE END OF THE LANE. My book group read this and it’s part fairy tale with a dash of horror and… I don’t know, it’s hard to explain, but I loved it. It captures childhood perfectly. Plus there are great examples of female power—both good and bad—which I found hard to resist.

Favourite Re-Read
Enid Blyton’s Mallory Towers: I hoovered these back like there was no tomorrow. I then went and read THE CHILDREN OF CHERRY TREE FARM. Seriously, Blyton is kiddie crack. 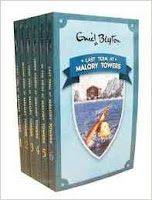